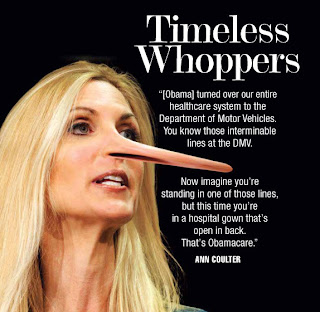 We all know that, as Colin Powell stated this week on Meet The Press, the Republican Party (and the greater conservative movement) has a “dark vein of intolerance” when it comes to racial and ethnic minorities. The righties deny it; but when you say that the first black President of the United States is "shucking and jiving"** or that he was born in a different country or that you question whether he really earned his college degrees or that you call him "lazy" or "uppity,"** you clearly have a problem with race. When Sarah Palin used the "shuck and jive" comment, there is no way you can convince me that she did not know the full expression..."shucking and jiving ni*ger." That is what she said whether she admits it or not.

Ann Coulter made the right's hatred of non-whites crystal clear the other night on Sean Hannity's show on Fox News when she stated that the U.S. does not have a gun problem, it has a "demographic" problem of too many non-whites. She then made the argument that all blacks and Muslims are killers, "So, perhaps, it’s not a gun problem, it is a demographic problem, which liberals are the one are pushing, pushing, pushing, ‘Let’s add more [African-American mass murderer] Colin Fergusons and more whoever the [Muslim] guy was who shot up Fort Hood.’ Why are they coming in to begin with?”

Coulter's racist logic makes no sense to thinking, non-bigoted people. If you agree with Miss Ann, I'd say you are a racist.

** These attacks were all made by Republican elected officials or official campaign spokespeople for a Republican candidate about President Obama.