Biden: The Clear Winner of the VP Debate

I'm not the only who knows Joe Biden hit it out of the park and creamed Paul Ryan:

Esquire: "Moreover, the battering that Biden gave Ryan brought something into sharp relief that the Republican party has been fudging ever since Romney put the zombie-eyed granny-starver on the ticket — that, for his entire political career up to that point, on critical economic issues, Paul Ryan was an extremist even by the standards of the modern Republican party, which are considerably high indeed. He was for full privatization of Social Security. He was for the absolute elimination of the defined-benefit Medicare and Medicaid programs. Since being selected, it has become clear that the Romney people have forced him to soften these positions. (His stance on Medicare, for example, has evolved from Kill It Now to Arrange for Its Slow Death Later.) On Thursday night, Biden dragged out the old Paul Ryan — and, I would argue, the real Paul Ryan — and put him on display, and he made the new Paul Ryan own him. For one brief moment, he almost got Ryan to commit to Social Security privatization again. You could hear the screams from Romney headquarters all the way up the Charles to where I was watching."

Columnist Dave Weigel: "Biden's body language: 'Oh, that's cute, you're trying to climb up to my level. Keep it up.'"

The Economist: "Joe Biden was easily the more memorable debater in every way; he was louder, more emotional, lucid, detailed, garrulous, grinning, teary-eyed and just Joe Biden. He sank some real barbs into Romney-Ryan. The Biden that Mr Obama hired in 2008 to excite lower-middle-class types from Scranton showed up and did his job"

Jonathan Chait: "In case you missed it, I predicted that Paul Ryan would wipe the floor with Joe Biden. That did not so much happen. Ryan did not perform quite as well as I expected — he seemed greener, younger, and he visibly gulped when challenged. But Biden delivered a revelatory performance that proved me utterly wrong, and probably gave depressed Democrats an emotional jolt in the process."

Kevin Drum, Mother Jones: "The Fox News crowd is going absolutely nuts over Biden's smiling and laughing. I guess I don't blame them, really. I probably would too if I were them. Partly this is because I think Biden overdid things on this score, but mostly because it's a lot easier than trying to take on the substance of the debate, where Biden pretty clearly got the better of Ryan."


Of course, Republicans are incapable of admitting their boy/hero Paul Ryan lost the debate. Instead of being honest (like the Dems were when evaluating Obama's less than stimulating performance last week), the Republicans are in full, unhinged attack mode. Former Arkansas Governor, Mike "I release murderers from prison if they say they like Jesus" Huckabee said Biden behaved like an "obnoxious drunk." Classy.

And as I predicted last night (ask my Mom since she's who I predicted it to when she called me after the debate), the right's talking point for the debate was that Biden was like Al Gore in 2000. Baseless as the comparison may be, I have heard at least a dozen conservatives use the line. Guess Frank Luntz got his memo out very early this morning! 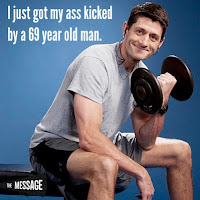