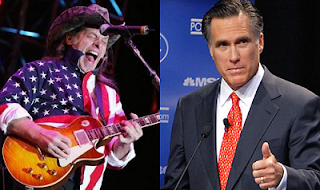 Whenever anyone loosely considered a Democrat makes a statement that Republicans and their friends in the media find objectionable, the right consistently calls for all liberals (whether they knew the person or not) to denounce the statement. It happened last week, for example, when corporate lobbyist and CNN personality Hilary Rosen argued (correctly, I might add) that Ann Romney has "never worked a day in her life" outside of the home.

Despite the fact that Ms. Rosen does not work for the Obama Administration or the Democratic Party (and was a top Hillary Clinton supporter in '08), the right-wing and the media asked every single Democrat who appeared on TV if they agree with Rosen and if they would denounce the statement. The right does this constantly to liberals, but the reverse almost never happens (see Rush Limbaugh).

Well, aging 70's rock star Ted Nugent was recently at the NRA convention and made a number of offensive comments about the president and called for violence against Democrats. Nugent said the current White House is a “vile, evil America-hating administration” which is “wiping its ass with the Constitution.” He then finished with this, “We need to ride into that battlefield and chop their heads off in November. Any questions?” Hmmm.

Why is no one calling for Romney to denounce Ted Nugent? He has as much, if not more, of a connection to Romney than Hilary Rosen does to Pres. Obama. Why the double standard? I guess I am to assume that every word Nugent has ever spoken, written or sang is now blessed by the Romney campaign.

And while we are on the subject, I wonder if Mrs. Romney would approve of Ted's pro-woman anthem, "Wang Dang Sweet Poontang"? Here are the lyrics from the conservative icon:


Obviously, an anthem for stay-at-home Moms, right? I'm waiting for Fox News to grill every Republican that appears on the network as to whether they support sweet poontang and chopping the heads off of Democrats.