Hey there. You still here? Yeah. Me, too. I seriously considered abandoning this blog due to a serious lack of interest. People who have read me over the years know that this has happened a few times before. Every once in a while, I stress out about the number of readers or comments or whatever, and I think about ways I should change the blog. But then I realize that I don't really care about that sort of thing. I do this blog for me - about my interests and opinions - and frankly I don't give a shit what you think. Though I guess that is not entirely true.

So I don't know how this blog is going to go from here on out. I'm taking it day by day. Because it's been almost two months since my last posting, let's catch up. 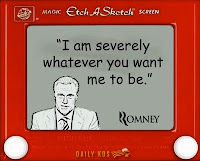 We'll start with politics, I guess. So, it looks like Romney will be the guy for the Republicans. Hilarious. In 2012, Romney is thought to be "too moderate" for the far-right GOP; yet in 2008, Romney was the "conservative alternative" to the "moderate" John McCain. Conventional wisdom says that a party divided cannot win (see Democrats in 1980 or Republicans in 1976). I, however, have a difficult time believing that all the rabid, teabagging, anti-woman, religious zealots who make up the GOP base will just sit at home and not vote because they don't like Mittens.


A reporter (whose name I forget, but I think was from Politico) who appeared on MSNBC framed this Republican distrust of Romney in a way that made me understand it. She said to imagine that in 2004 the establishment of the Democratic Party wanted Joe Lieberman to be the nominee. All the big money and the important staffers were locked in to him, and the media said the fix was in for Joe. Now, as a liberal, and a member of the Democratic base, I would not stand for this. Is Lieberman better than the Republican nominee or president (imagine you're still in 2004)? Probably...but just barely. Certainly not enough to get excited about or to volunteer for the campaign or to donate money.

Furthermore, on most of the important issues in 2004, Lieberman was more in line with Pres. Bush than he was with the Democratic Party. Sure, he could talk a good game and act like he is liberal. But we all knew Lieberman was a Republican at heart. He was always known as a social conservative, and that, to me, is the worst kind.

Joe did run for the nomination in 2004, and the party rejected him. That's when he went on a one man sabotage operation of the Democratic Party which eventually led to him appearing at the 2008 Republican Convention and endorsing John McCain.

In the case of Romney, though, the party is not necessarily rejecting him. He does, after all, have the most delegates, and he is winning primaries. No one has ever considered Lieberman to be a liberal, yet many on the right did view Romney as a conservative prior to this current election cycle. The right-wing base appears to be torn on Mitt. Is he a conservative who acted like a moderate to win in a blue state like Massachusetts? Or is he really a moderate who is now pretending to be a conservative in order to win the Republican primary. Tough call. Fortunately for me, I don't really care. I won't be voting for him anyway. I'm voting to re-elect the president. 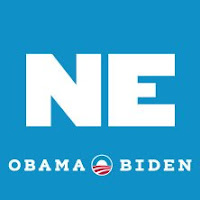 Speaking of which, I was just down at the Obama campaign's Nebraska office here in Omaha. Turns out, one of the local organizers is a long-time listener of my radio show, New Day Rising (which is now on Sundays 2-5 pm and streams online at 897theriver.com).

I will be volunteering whenever I can for the next few months. This year, the Obama campaign's Nebraska operation is a bit scaled down from last time (smaller office, smaller staff), and my feeling is that getting the one electoral vote for the district that houses Omaha is a little less significant than it was in '08. Still, the campaign is taking no chances and wants that extra vote. It would be great to help them get it.


In other politics oriented stuff, my fave media personality from a few months ago, Alex Wagner of MSNBC, is still my favorite. I am now DVRing her show every day and watching it on my lunch hour. Obviously, I'd prefer to have her in the prime time line-up, but I'll take what I can get at this point. I did learn a little something about her the other day on the show. In a discussion about recent events in Burma, Alex revealed that she is 1/2 Burmese. Interesting.

Oh, and I almost forgot. Since the last time I was here, Andrew Breitbart died. Yeah, bummer. Who's going to rile up the racists on the right now that their hero has died? I'm sure someone will pick up the slack. I wish the autopsy results from Breitbart's death would be released. Curious how a man in his early 40s dies suddenly while on a walk. If being an unhinged psycho caused instant death, how are Michelle Malkin and Rush Limbaugh still among the living?

Former Senator Bob Kerrey is back in Nebraska and running for his old seat again. This is fantastic news for the Democratic Party in Nebraska who really had no one of substance to run for the seat being abandoned by the retiring Ben Nelson. Good riddance to Nelson, by the way. Since Kerrey left the Senate in 2000, he moved to New York to head the New School, and was also on the 9/11 Commission. Not a bad resume in addition to his two Senate terms and two gubernatorial terms. Democrats do not have much standing in Nebraska, but Kerrey is well liked here. His candidacy is pretty much the only chance the Dems have of keeping this seat. Fingers crossed.
Enough politics for one post. Since the last time I joined you all, I got a new car! I got a 2012 Kia Forte Koup. I love the car. I was planning on getting a new Honda Accord or Civic, but I went to an auto show with my Dad and saw the new Kias. That company has really stepped up its game in the last few years or so. Truth be told, when I saw the Forte at the auto show, it reminded me of the Acura Integra from the late 1990s. I had one - a 98 - and I really liked it. In fact, I think I might have gotten rid of it too soon. Maybe I'm making up for that now. Who knows.

The new car, like most new cars, has satellite radio. I assumed that with a music library of over 40,000 songs, I would never need satellite radio. I was wrong. Now I can listen to Howard Stern in the morning and channel 127 - politics left - in the afternoon. The music channels are okay, but my ipod is better.


I haven't been hitting as many shows as I used to, but I did see a great one the other night at The Waiting Room. Howler, a new band from Minneapolis, opened the show; Yellow Ostrich, from Brooklyn, headlined. Howler was fantastic. I keep hearing comparisons between them and The Strokes. Personally, I think that is a bit superficial. There are elements of the garage-y pop of the first Strokes record, but Howler's singer has much more of a vocal range and the songs are more varied. Yellow Ostrich had a very different sound. They were a three-piece that consisted of a guitarist/vocalist, a drummer, and a guy who played like 10 instruments (keyboards, sax, trumpet, bass, etc). They made some great indie pop with really unique arrangements. After about 35 minutes or so, I got a little bored and went home. Still, I did like the band.


Hmmm....what else? One of my favorite TV shows, Fringe, may be getting cancelled after this season. I really hope this doesn't happen, but these days, nothing good lasts. Fringe is easily the smartest and most interesting science fiction show on network television. Maybe that's part of the problem. Putting it on Friday night is the other problem. That is still a terrible time for a show to be on. According to various sources, Fringe is one of the most DVR'd shows around. Unfortunately, that matters very little to the show's survival. Since network TV survives on advertising, if everyone is DVRing a show and skipping over the commercials, no one will want to advertise. But if Fox cancels the show, couldn't a network like SyFy, AMC, or TNT pick it up? The show has a loyal fanbase and has millions of viewers (just not enough millions for Fox, but should be more than enough for SyFy). I certainly hope so. 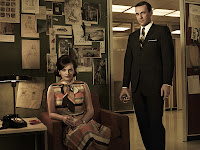 Another favorite show, Mad Men, is back for its final season. This show is going out on its own terms, which is the best way to go, if you ask me. It's now 1966 on the show. Don has his new wife (played by the unbelievably beautiful Jessica Pare), the agency is getting better clients, Peggy is getting more responsibility, and Joan is getting ready to come back to work. My only complaint is the new "fat" Betty. It is a crime against humanity to put January Jones in fat make-up and to try and make her look less attractive. A crime.

Well, friends, that's about all I have for now. I will try - try - to keep my updates more regular from now on. Take care.
Posted by Dave Splash

Still here, still checkin' out your blog, and have been hoping you'd be back... glad you are!