Don and Peggy in the Doghouse 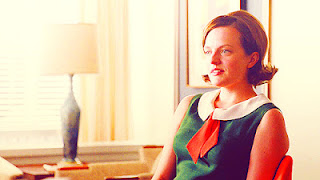 Very strange Mad Men this week. First off, major characters like Joan, Pete, Betty, and Lane were either absent entirely or only on screen for a matter of seconds. I always like to see Joan, of course. Roger’s wife, Jane, returns, but it may end up being the last time we see her on Mad Men.

So far this season, we haven’t seen Don do a whole heckuva lot of work. He is always off gallivanting somewhere with Megan. He is delegating a lot of work to Peggy; and this week, that kinda backfired.

With the Heinz pitch looming, Don and Megan take off to an upstate Howard Johnson’s (were those some sort of big deal in the 60’s, cuz they seem kinda lame now), and Peggy is left to make the pitch herself. Both situations went bad.

At the HoJo, Don and Megan get in a fight over his controlling nature and how he treats her at work. The fight is so bad that Megan gets out of the car and Don leaves. Shortly after ditching Megan, Don returns to the hotel and can’t find her anywhere. Panic sets in.

When Don calls the office to see if Megan has called for him, a distressed Peggy tries to tell him how badly the Heinz meeting went, but Don was too distracted. Turns out, Megan took a bus home. When Don returns the next day, he has to kick down the door to get inside, and then faces a livid Megan who believed she had been left at the hotel. They fight some more, and some sort of resolution is made, as Don treated her quite differently the next day at work.

The other bad situation was Peggy’s Heinz pitch. When they didn’t like her idea (again), she kind of went off on the executives. Big no-no in the ad world. Peggy is removed from the job, but the business will remain with SCDP.

Bert Cooper, apparently awake from a nap or something, scolds Don on his recent absenteeism, and his delegation to Peggy. Criticism generally rolls off Don, but this one seemed to stick.

The last notable event this week came from Roger Sterling and Jane. Roger is forced to go to a party with Jane’s friends, though it turns out these friends are not nearly as stodgy as Roger feared. The purpose of the party was for everyone to try LSD. Roger, of course, is skeptical. At first, he doesn’t even believe it’s working. That is, of course, until his cigarette seemed to disintegrate between his fingers. He was tripping balls.

The most significant moment of the acid trip was the conversation between Roger and Jane where they seem to amicably end their marriage. Roger, of course, remembered the conversation and was acting on it. Jane, however, didn’t really remember it, and was shocked to hear Roger was leaving her. She warned him that the divorce would be costly.

I bet it will be…