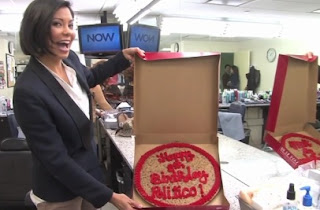 If I was not the first person to pick up on the otherworldly awesomeness of MSNBC's Alex Wagner than I must have been the second. I have only posted on her three times (this is obviously the fourth), but she has become, by far, the most searched for person who arrives here at DaveSplash.com. The screengrab I got from her appearance on Bill Maher is among the first choices in a Google image search on Ms. Wagner. In fact, I think some right-wing, gun-nut website "stole" the image to post about her on their site.**
The most used search term is definitely "Alex Wager hot," but that is not the only one. Some actually search for other things about her, too. "Alex Wagner nationality" is another big one. Well, whatever you're looking for in terms of fandom of Alex "Wags" Wagner, I will try and provide.
Regarding her show, NOW with Alex Wagner, I am now DVRing it everyday. I watch it on my lunch hour. It's a nice reprieve from the normal, humorless analysis of politics (with the exception of Maddow who still mixes in quite a bit of humor) that dominates the media. To DVR a news program is hard because, if you pay attention to news during the day, by the time you watch it, it is old news. Yet even if I have heard 50 blowhards discussing the same issue on a million other shows, Wagner's show still manages to make the discussion unique. Kudos to her for that.
If you arrived here by searching for "Alex Wagner hot"...welcome, friends.
**since "technically" I probably never had permission to capture the pic from Maher in the first place, I guess we are both guilty of stealing
Posted by Dave Splash

Her "nationality" is American. What people are wondering about is her ethnicity. She is reportedly half Burmese, which would explain her exotic appearance.

True, Fnark, but to the morons that search for "alex wagner hot" that may be too tough a nut to crack.