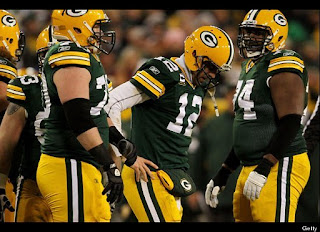 There is one prediction of mine that I wish hadn't come true. The prediction in question was the one where my team, the Green Bay Packers, with a 15-1 season, would lose in the playoffs in the first game. It happened yesterday. Despite Aaron Rodger's other-worldly season, and the nearly perfect record; by mid-season, I didn't think the Pack would have a Super Bowl repeat.
First came the game against Tampa Bay in November. The Bucs, having a terrible season, nearly defeated Green Bay. And really, if it hadn't been for the extreme number of penalties, the Bucs would have won. After that game, the margin of victory for GB began to get smaller. Then came the loss to the Chiefs (a team almost as bad as the Bucs this year) which stunned the sports media.
When I heard that the Packers 1st playoff game would be against the Giants, I knew my prediction would come true. Because I had Victor Cruz on my fantasy team, I followed the Giants this year more than I ordinarily would have. I saw their amazing passing game, Eli Manning's ability to come through in the clutch, and the team's impressive defense. The Packers' D just did not gel this year, and it is very to hard keep winning when your defense allows so many points to be scored.
Tough luck, Pack. We'll get 'em next year. As for the Superbowl, I am predicting the Giants vs. Ravens. Not sure yet who will win.
Posted by Dave Splash

Email ThisBlogThis!Share to TwitterShare to FacebookShare to Pinterest
Labels: Football

Ha! Victor Cruz was on my fantasy team as well.

I was also pulling for the Packers, but one of my teams, SF, is still in it. Sad to say though, I'm not sure how they will beat the Giants.

If I had to pick anyone to win a conference championship and then the Super Bowl, at this point it would be New York. But it's hard to tell!

Yeah. I was very impressed with the 49ers defense last week, but that Giants passing attack is amazing. Hard to beat. Should be a good game, as will the Patriots/Ravens game.