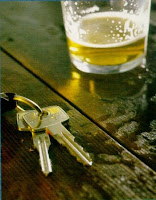 So I had quite the experience last night, and I nearly became a victim of a drunk driver and I never left my Living Room. Around 10:30 pm or so last night, I was watching a movie and I heard some noises coming from outside. It sounded like a car driving fast right near my house. Now, I live barely 1/2 a block from a major street, so at first, I assumed it was just traffic noise. But these sounds were getting louder - not quieter. So I peeked out of my blinds and saw a car driving on my lawn and toward my house. I then watched as the car backed up and drove over my mailbox.
It looked like it was my next door neighbor driving, but I couldn't actually see the driver. I scrambled to find my phone to call 911. While searching for the phone, I heard a loud bang. Then another. Then another. It sounded like someone was, literally, driving into a house, backing up, and doing it again. I found my phone and called 911. After placing the call and agreeing to talk to police, I looked outside and the car was gone.
I went outside to wait for the police and noticed that the banging I heard earlier was exactly what I suspected it was. The drunk driver (who I now know was my next door neighbor) had attempted to get into her garage, but wasn't quite able to make it on the first attempt. I guess she got in there on maybe the fourth try, closed the garage door, and went inside.
When the police finally arrived they saw the mailbox and the damage to my neighbor's garage and went to talk to my neighbor. She was, as I assumed, completely wasted. They trotted her through the yard looking at the damage she had caused, and she had no recollection of it whatsoever. This was 25 mins. after it happened!
Ultimately, she was arrested for DUI. She must have admitted it to the police since my statement said only that I assumed it was her, and the car looked like hers, but I couldn't see who was inside. I guess, at some point, I will be called to testify by the state attorney and get reimbursed for the cost of a new mailbox.
Great. Now I get to live next door to this drunk beeyatch. I hope she has zero recollection of the event. Well, whatever...
Posted by Dave Splash

Oh, man. Sorry to hear you had to go through that.

We have a neighbor problem too. The guy who owns the house next door decided to rent it to a bunch of young guys and they like to go out on the deck late at night and party. I'm tempted to track him down and tell him he better do something about it or I'm taking him to court.