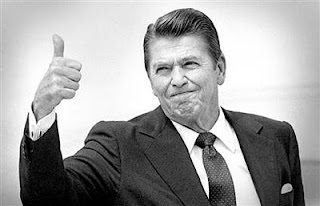 "We’re going to close the unproductive tax loopholes that allow some of the truly wealthy to avoid paying their fair share. In theory, some of those loopholes were understandable, but in practice they sometimes made it possible for millionaires to pay nothing, while a bus driver was paying ten percent of his salary, and that’s crazy. [...] Do you think the millionaire ought to pay more in taxes than the bus driver or less?" - Pres. Ronald Reagan, class warrior, June 6, 1985
Funny. When Reagan says it, he is a big time American, who loves freedom. When Obama says the same thing, he is an anti-American, freedom hating, socialist. Anyone think the Republican Tea Party has no guiding principle other than hatred of Pres. Obama.

This video also shows just how to the right the Democratic Party has gone since the 1980s. The Dems are now like the GOP from the 80s, and the Republicans are like the Dixiecrats of the 1940s. There is no left-wing party in the US.
Posted by Dave Splash