What Pres. Obama Has Accomplished So Far

Many liberals, myself included, frequently get upset with Pres. Obama for his near constant willingness to negotiate with Republicans, even when it is not required (like during the 9 months when the Dems had 60 votes in the Senate). Still, for a president with the most intransigent opposition party with the most filibusters in US history, who inherited the worst economic situation in 70 years and two wars, the president has done a lot. He is not perfect, but is there an alternative who could do more? Not that I've seen. 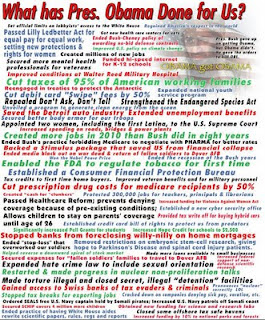 
Created more jobs in 2010 than Bush did in eight years. Ended Bush's practice forbidding Medicare to negotiate with Pharma for better rates. Backed a stimulus package that saved US from financial collapse. Ended media blackout on war dead & return of fallen solders to Dover AFB. Won the Nobel Peace Prize. Ended the recession of the Bush years. Enabled the FDA to regulate tobacco for first time.

What Obama did in his first 2 years in office when he had a Democratic Congress is soooooo pathetic, it is hard to get behind him for the few things he did do....really merely coasting along on minimum.

Will I vote for him, yes...with shame and self-hatred, but yes.

Well, the president has been far from perfect, but I fear that too many liberals, such as yourself, are going to get into that year 2000 way of thinking. The thinking goes that the Democrats and Republicans are essentially the same, so I'll throw my vote away and go for some fringe 3rd party guy like Ralph Nader. I think the lessons of the Bush years have proven that that line of thinking is severely flawed, as we got a nightmare for eight years.

Obama has been tasked for the last 2.5 years with cleaning up the mess left by the last administration, and not focusing much on his own agenda. I would hope that those on the left are at least aware of that fact. The unprecedented level of extreme opposition to the president, plus the Citizens United case, have put an unparalleled level of obstruction onto any implementation of any Obama agenda items. He still got a lot done, as the post suggests, but I think that too many on the left are angry because Obama does not use more executive power to enact things (the same thing the left criticized Bush for doing).

Add this to the fact, that many "Democrats" like Lieberman, Ben Nelson, Max Baucus, Even Bayhe and others are little more than Republicans in a blue jacket. The myth of the 60 vote Democratic Senate is just that...a myth.

We don't have a parliamentary system here, and you get nothing for coming in second place, as I know you know. So, rather than spending too much time fretting about Obama, I am choosing to focus my attention on the defeating the extremists who are challenging him. A middle of the road, moderate Democrat like Obama is far more preferable to any bible thumping, gay bashing, tax cuts for the rich loving, union busting, Ayn Rand reading, voodoo economics practitioner that will oppose him.

Hmmm. I just said I would vote for him anyway... But even given the terrible context and all the benefit of the doubt I gave him, he has done much less than he could have, but we will differ on that point...and last I counted, there were 100 senators and a majority was 51....fake filibuster threats notwithstanding...

I know you said you'd vote for him, and I hope that most left of center types, like you and I, will also.

I agree about the whole fake filibuster thing, and I blame Harry Reid's 2006 vagina transplant for the lame way the Dems in the Senate keep giving in to the likes of Jim DeMint, who won't even spend five actual minutes filibustering. But I don't think Obama can be blamed for that.

2012 will be the nastiest election in modern history and I just want to make sure all the people on my side (generally) aren't turned off from voting. Low turnout always helps the GOP.