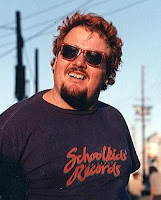 D. Boon (April 1, 1958 - December 23, 1985) was the singer and guitarist for legendary punk band, Minutemen. He was also a political activist and an artist. It is impossible to overstate the importance of Boon to the music of today. His anthemic, politically charged songs created the blueprint for political bands that came afterward (i.e. Rage Against the Machine); while his sound (a mix of punk, funk, and hard rock) has inspired everyone from Red Hot Chili Peppers to Sonic Youth to Public Enemy and nearly everyone claiming to be playing "alternative rock."
Rolling Stone published an article last year called Remembering D. Boon and the Minutemen. Read it here.
Here is one of the best known and iconic Minutemen videos for "This Ain't No Picnic."