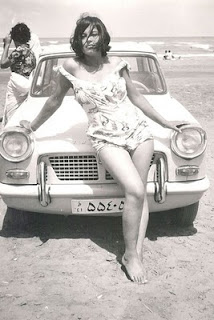 If you listen to or watch right-wing media, you will no doubt have heard numerous calls for a military attack on Iran. The neo-con right has been pushing for a war in Iran since, at least, 2005. This, of course, would be a disaster; and another extremely costly, long military occupation that would cost thousands of lives and billions of dollars.
One of the talking points about attacking Iran comes in the form of saying that if the US bombs Iran, the people will be supportive and join in the fight against the current regime. Most experts disagree.
Either way, the R&R Gallery in Los Angeles currently has a display on Iran called Before the Chador. It features personal photos from an Iranian family from before the Islamic Revolution in 1979. Check out the photos here, and tell me how different these folks are from Americans. Then ask yourself if a foreign invader bombed your hometown, would you join sides with them?
(h/t Daily Dish)
Posted by Dave Splash

Yah, then the Shah's SAVAK, in direct partnership with the CIA, eliminated the secular and intellectual opposition, and lo and behold only the religious opposition was left...oops...Islamic Revolution here we come...

Hmmm... Do you suppose those same concerns were considered before President Obama chose to bomb Libya?

I'm not psyched about Libya, but there is a major difference between them and Iran or Iraq. In Libya, the rebels started this themselves. It was their idea, and they asked for international help. The US didn't have to manufacture intelligence and cook up 10 different justifications in order to "assist." The UN and Arab League supported the move (unlike Iraq, and irrelevant in Iran since Iranians aren't Arabs anyway) and the US is not invading with 100,000 or more troops in search of weapons that don't exist. And Qadaffi's atrocities are happening now, unlike with Saddam where one had to look 10-20 years before the invasion to find them (when Iraq was a US ally, no less).

I seem to remember when righties were touting the "success" with Libya and using it to prove the invasion of Iraq was a good idea. So, you guys no longer think Qadaffi is a good guy who was scared straight by the US's invasion of Iraq? That's good to know.