If You Haven't Already, Check Out "The League" 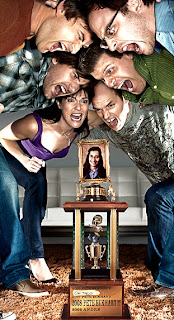 I know I am pretty late in discovering this, but have you seen The League? The F/X comedy airs after It's Always Sunny in Philadelphia, yet I only started watching it recently. The show is centered around five guys, friends since high school, who escape the lameness of their adult lives every Fall with a cut-throat fantasy football league. I know. It seems a little thin for a premise of a show. That's what I thought at first. Maybe because I actually play fantasy football, or maybe because I know sarcastic assholes like these guys, but that thin premise makes for an hysterical show. The League was created by the husband and wife team Jeff Schaffer and Jackie Marcus Schaffer. Jeff used to be writer for both Seinfeld and Curb Your Enthusiasm, and that shows. The examination of the minutia of life, the extreme sarcasm, and the improvisational style of the show are trademark Curb qualities.
The guys: Pete, Ruxin, Taco, Kevin (and his wife Jenny) and Andre compete in their FF league for the prized Shiva trophy which is awarded to the winner of their league. There is an episode of the first season where the origin of "Shiva" is explained. That must be seen.
The two main characters, I would say, are Pete and Kevin. Pete is the devil-may-care guy who has a reputation for making unfair trades ("trade raping") to unknowing league members. Once, he initiated a trade with Andre by offering Plaxico Burress for a top running back, knowing full well that Burress was in prison and not playing in the NFL. Kevin is the commissioner of the league, and an attorney. He is married to Jenny and has a young daughter. There are lots of rumors that Jenny secretly "runs" his team, and those rumors are true. Eventually, she was allowed to have her own team.
Jenny, Kevin's wife, is as knowledgeable (if not more) about football as the guys, and is eventually allowed to have a team. She seems like a cool wife. She likes football, can be as crude and crass as the guys, and she allows her husband to watch porn (as long as he is working out while watching it).
Taco is Kevin's younger brother. He seems to know nothing about football, yet has won the league in the past. Taco is a perpetual stoner and an unemployed musician. He often performs incredibly inappropriate, yet hysterical, songs at parties. 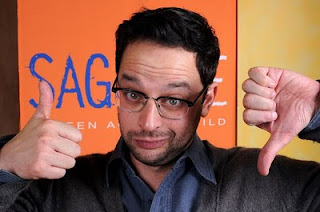 My favorite character is probably Ruxin.Ruxin, a sleazy defense attorney, utilizes his questionable ethics in his professional and personal life. He is, by far, the meanest of the group, and would seemingly do anything to win The Shiva. He is married to Sofia, who appears to be the only person who he is afraid of and/or obedient to. Ruxin is constantly pestering others for tips about who he should play on any given Sunday. When he gets mad at a player for under-performing, he is not above telling him in person (not a suggested move). 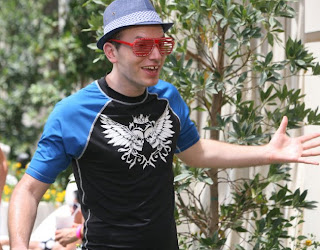 In a close second place for my favorite character, we have Andre. Andre is a wealthy and successful plastic surgeon, but because of his overt nerdiness, he is the butt of many jokes from the rest of the guys. They make fun of his use of dated catchphrases, his baldness, and his choice in clothes. In season one, he winds up dating the girl whom the "Shiva" trophy is named, but loses her when she finds out about said trophy. Due to his trusting nature, Andre is often the victim of a "trade rape." Despite this, he still won the trophy in Season One.


I am eagerly awaiting the release of Season Two of The League on DVD or Blu Ray because there are a few episodes from that season that I have not seen. If you subscribe to Netflix, rent the first season - it's only two discs. The more I watch this show, the more I like it. I can't wait for this Fall!
Posted by Dave Splash

Wow, I gotta watch this. Not braggin mine you, but I have forgotten more about pro sports than most men ever know. ;)

You should. Season One is streaming on Netflix!