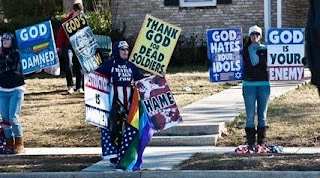 Today the Supreme Court's ruling was announced on the case of Snyder v. Phelps et al (read the entire decision here in pdf). The case involves the family of a soldier who died in combat and the fine folks at the Westboro Baptist Church who picket military funerals with very offensive signs and slogans ("Thank God for Dead Soldiers" "God Hates Fags" etc). I have long felt that the Westboro people are among the most loathsome in America. Maybe even the world. But do they have the right, in America, to do what they are doing?
According the Supreme Court, they do. In an 8-1 decision, the Court came down on the side of Westboro and stated that they could not be forced to pay any money damages to the Snyder Family (the family of the deceased soldier) because their actions are protected by the First Amendment. On a certain level, I agree with the eight justices on this one. The First Amendment is supposed to offer protection to even the most vile and offensive speech. But I had always thought that when the purpose of speech is to incite, then said speech is not protected. Justice Alito, apparently, felt the same way. He was the lone dissenter.
He wrote, "Our profound national commitment to free and open debate is not a license for the vicious verbal assault that occurred in this case. . . . In this case, respondents brutally attacked Matthew Snyder, and this attack, which was almost certain to inflict injury, was central to respondents' well-practiced strategy for attracting public attention."
I almost never agree with anything Mr. Alito says or does, but in this case, I think he represents the view of most Americans. Protesting military funerals (or any funeral, for that matter) with the kind of signs the Westboro folks use is designed to incite. It is vicious and intentionally designed to make funeral attendees angry at them. I guess when the incitement is designed to draw anger and violence toward the people doing the inciting, that free speech exemption does not apply.
I do think the majority made the right decision here, even though viscerally, I support the dissent. I also find it unfortunate that on the extremely rare occurrence where there is not a 5-4 decision by the Court, that the Justices are forced to agree on defending scumbags like the Westboro Baptist Church. That is America, I guess.
Posted by Dave Splash

I agree, Splash. I think the court made the correct decision, even though these Westboro Baptist Church people are an anathema to what Christ taught. They are disgusting in their tactics.

I do think that the Court would have granted damages and voted differently if it had been anti-war protesters instead of a religious protest (regardless of how distorted a view of their religion they have). But, either way, I reluctantly agree with the Court because there is really isn't a way around the 1st Amendment.

I would hope that you would be wrong if this was about anti-war protesters too. While I typically don't agree with much of their reasoning, their protests are absolutely protected 1st amendment free speech!

I agree with both of you. Good comments.