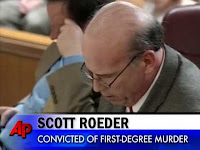 Here is further proof that the tea party movement (the teahadists) is nothing more than the old religious right. The South Dakota state legislature, dominated by Republican teahadists, has just passed a bill though committee that would make killing an abortion provider "justifiable homicide."
From Mother Jones, "A law under consideration in South Dakota would expand the definition of 'justifiable homicide' to include killings that are intended to prevent harm to a fetus—a move that could make it legal to kill doctors who perform abortions. The Republican-backed legislation, House Bill 1171, has passed out of committee on a nine-to-three party-line vote, and is expected to face a floor vote in the state's GOP-dominated House of Representatives soon."
This is really one of the most despicable laws ever written and will give a license to anti-abortion zealots to kill anyone who disagrees with them. Then, they can cry that they were trying to save a fetus or some microscopic cells or whatever it is they care more about than adult women.
The right really is waging a teahad against the American way of life. Disgusting.
Posted by Dave Splash

All of your hyperbole aside, I agree with the main premise of your posting. This law is sick.

You don't prevent abortions by killing others.

Well, with this law, and the right's attempt to redefine rape and incest, it's hard to tell how out there and fringy the teahadists are willing to go. The tea party GOP ran for election saying they would focus on jobs. Yet, after a month and a half in power, they have not put forth even one jobs bill. Nothing. But they had time to write bills about abortion and to make their ridiculous attempt to repeal health care reform and have offered no replacement (as promised, as well).

Seems that I have been right about the tea party all along: they are just the old Christian Coalition under a different name.

Repealing health care will save jobs.... lots of jobs. I don't want congress passing another "jobs bill". They need to cut red tape and reduce taxes for small businesses and THAT will create new jobs.