I Support the Workers of Wisconsin!! 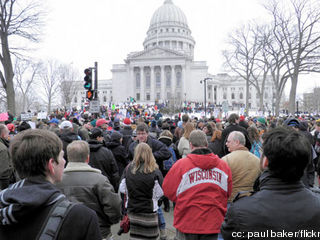 I just have to say how incredibly proud I am of the citizens of Wisconsin for their continued protests of the actions of its newly elected teahadist governor, Scott Walker. As you may know, I lived in Wisconsin for more than a decade, and grew to love the place. The state was always very evenly divided politically, with more liberal parts of the state in the south, and more conservative parts in the north. The two sides always found a way to work together. Back when I was there, the state was run by a Republican governor named Tommy Thompson (who went on to join the Bush Administration). I never liked the guy, but I would gladly take him back if the choice were between Thompson and the current joker, Scott Walker.
Walker's entire campaign last year - and his term, so far - have been based on a lie. The lie is that Wisconsin is in the midst of a "financial crisis." It isn't. Or at least, it wasn't until Walker came in last month. In his short time in office, Mr. Walker has drastically reduced taxes on the wealthy and corporations, plus he has created new tax breaks for out of state business (who "coincidentally" happened to financially support his campaign), while offering nothing for small business already located in the state. To the extent that a budget "crisis" exists is entirely due to the policies implemented in the last six weeks.
In Wisconsin, like most states, any financial problems are not the fault of public sector unions. In 2009 and 2010, public sector unions across the country took pay, benefit, and pension cuts, as well as leaving open positions un-filled, in an attempt to compromise with states who absolutely refused to do anything to increase tax revenue. For some reason, right-wing governors find enemies in toll takers, snow plow operators, teachers, police officers, fire fighters, sanitation workers, and a myriad of essential public sector workers who do their jobs every day, and expect that agreements made between them and the state will be honored. But, as we learned from the tea party, contracts guaranteeing million dollar bonuses to bankers and hedge fund managers are sacrosanct, and contracts guaranteeing anything to a union member should be ignored.
Union members are not greedy and self interested, as NJ governor Chris Christie stated yesterday. They are average middle class people who were hired to do a job, and they do it. Contrary to what you may hear on Fox News, union jobs are, in fact, "real jobs." These people are not the enemy. They deserve the right to collectively bargain for better wages and benefits. It is only the radical, teabag, Republican Party of the 21st century that thinks differently.
Under the last great Republican president, Dwight Eisenhower, unions were hardly the enemy. From the 1956 Republican Party platform:

"The record of performance of the Republican Administration on behalf of our working men and women goes still further. The Federal minimum wage has been raised for more than 2 million workers. Social Security has been extended to an additional 10 million workers and the benefits raised for 6 1/2 million. The protection of unemployment insurance has been brought to 4 million additional workers. There have been increased workmen\'s compensation benefits for longshoremen and harbor workers, increased retirement benefits for railroad employees, and wage increases and improved welfare and pension plans for federal employees.

In addition, the Eisenhower Administration has enforced more vigorously and effectively than ever before, the laws which protect the working standards of our people.

Workers have benefited by the progress which has been made in carrying out the programs and principles set forth in the 1952 Republican platform. All workers have gained and unions have grown in strength and responsibility, and have increased their membership by 2 millions.

Furthermore, the process of free collective bargaining has been strengthened by the insistence of this Administration that labor and management settle their differences at the bargaining table without the intervention of the Government. This policy has brought to our country an unprecedented period of labor-management peace and understanding.

Continue and further perfect its programs of assistance to the millions of workers with special employment problems, such as older workers, handicapped workers, members of minority groups, and migratory workers;

Protect by law, the assets of employee welfare and benefit plans so that workers who are the beneficiaries can be assured of their rightful benefits;

Assure equal pay for equal work regardless of Sex;

Revise and improve the Taft-Hartley Act so as to protect more effectively the rights of labor unions, management, the individual worker, and the public. The protection of the right of workers to organize into unions and to bargain collectively is the firm and permanent policy of the Eisenhower Administration. In 1954, 1955 and again in 1956, President Eisenhower recommended constructive amendments to this Act."

Could you imagine a Republican platform today that offered any of that? And yet, the right seems to idolize the 1950s as some sort of right wing utopia where there were no unions and things like equal protection and fairness didn't exist. Dwight David Eisenhower, hero of WWII and two-term president (who ended a war, rather than starting one) would be called anti-American and a communist by the tea party and the Republicans. In fact, the extremists of the John Birch Society called Eisenhower a commie back then, and they were kicked out of the conservative movement. Today, the Birchers - championed by Glenn Beck - dominate the GOP and its ideology. When will Eisenhower wind up on Beck's chalkboard of hate? Soon, I imagine.
What I find so comical is how the right wing is freaking out about the protests in Wisconsin. Naturally, whenever liberals protest something, they are hateful, anti-American radicals, or communists, or jihadists, or whatever; but when the tea party rallied with their hateful, racist signs and protested against higher taxes (even though their taxes are at a 50 year low), they were patriotic. Of course, the teabaggers were mere shills for big business and the members were unknowingly promoting ideas that were to their own economic detriment, but that is for another post.
The freedom to peaceably assemble and protest the government is one of the most important rights guaranteed by the US Constitution. This right is not merely for those in the tea party. It is for all Americans. Conspiracy obsessed lunatics like Glenn Beck and Rep. Paul Ryan should look back two years ago to see what they said about protesters then. Nothing in the Constitution has changed. Workers have the right to assemble and protest just like the tea party. This is not the end of the world, guys. Settle the fuck down. The Governor of Wisconsin, in an attempt to threaten and intimidate the protesters, has called up the state's national guard. What would you wingnuts have thought if Pres. Obama brought in the military to stop your right to free speech?
Did you notice how no one brought guns to the rallies in Wisconsin? What a nice contrast to the teabagger rallies of 2009-2010.
Posted by Dave Splash

Thanks, Dave. As a public employee, I have been wondering when the day might come that we get blamed for all the country's ills by a bunch of idiots whose main purpose in political life is to punish others. Unions have tended to push back against the Republicans... I wonder why! LOL...

They just want to push measures such as these, keep them in the news, and "stay on message" about how those employed in the public sector are shiftless, worthless, types who suckle on the government teat, pig out at the trough, etc.

This, they hope, will lead to their ultimate goal of privatizing everything. Not just schools, but things like police departments, fire departments... because they believe that if you can't make a dollar of off something, it is basically worthless or it is a drain on society.

We in the public sector don't want everything privatized. Those in the private sector don't want the government running everything. Is something like 8% of the nation's workforce a majority? I hardly think so... If there was more of a balance, there would be more public employees. As it is now, I don't believe there are too many of us.

For those who do believe that? Fire us then. I get the distinct impression that's what you want, is to balance the budget on our backs and on the backs of anyone who is not in the top 1% or so of America's wage earners.