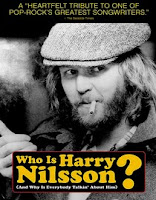 (from thedarkstuff.com) Last night, I watched a great documentary called Who Is Harry Nilsson (And Why Is Everybody Talkin' About Him?) about Harry Nilsson (obviously). Prior to watching it, I knew very little about the man other than that he sang the theme song to the movie Midnight Cowboy (which I found out was not meant to be for that movie, and was actually released prior to it) and that when John Lennon and Yoko Ono split for a time in the early 70s, Lennon and Nilsson spent a lot of time together drinking and womanizing. Obviously, there is a lot more to his story than that.


Nilsson had a very impressive body of work, and came to international attention in the 60s when The Beatles declared him their favorite. Nilsson formed long term friendships with all of the Beatles, especially Lennon and Ringo Starr.
I decided to post a video today of Nilsson's "You're Breakin' My Heart." It's not much of a video, really. It's just the words to the song running across the screen. But I can't post this song without thinking about Cee Lo Green's "Fuck You." They kind of share the same sentiment.
Posted by Dave Splash

He was truly a great songwriter. Seems like he knew how to wring a great deal of emotion out of just a few words.