There She Goes Again... 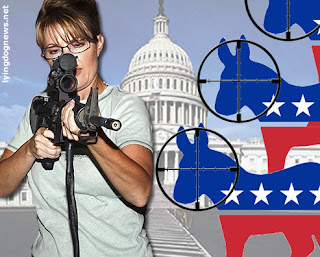 Sarah Palin has finally responded to the Arizona shooting tragedy with an angry, vitriolic, incredibly defensive, and accusatory video that she posted on her Facebook page. I will not link to it, as I find the video incredibly offensive.
In the video, Palin brushes off criticism that her frequent gun and violence laced statements and actions over the last two years contributed in any way to the tragedy in Tucson. Even though no one said she was responsible, and no one claimed the shooter ever saw her map where she put gun sights over the district of Gabrielle Giffords (D-AZ), Palin lashes out at "journalists and pundits" for what she calls a "blood libel" against her.
Calling her non-existent persecution "blood libel" is incredibly offensive. The historic definition of blood libel "refers to a false accusation or claim that religious minorities, almost always Jews, murder children to use their blood in certain aspects of their religious rituals and holidays.Historically, these claims have–alongside those of well poisoning and host desecration–been a major theme in European persecution of Jews."
Every single Jewish person on earth knows what a blood libel is, and knows how ridiculous it is for Palin (who has had credible accusations of Antisemitism leveled against her in the past) to use when discussing herself. Once again, Ms. Palin has made a bad situation worse.
Her overtly hostile tone and choice of words, her lie that Democrats used gun sights over their political opponents also (and didn't her spokesperson ridiculously deny they were gun sights anyway), and her unwillingness to tone down her own rhetoric will likely do more damage than good for her and her future ambitions. In addition, her refusal to deal in two way communication (instead of her chosen form, Twitter and Facebook) where she could be asked questions, makes one wonder if she is so wrapped up in the right-wing/Fox News/talk radio cocoon that she cannot actually answer questions and can only read talking points. Life isn't your reality show, Ms. Palin. If you want to continue to be a national figure, try doing a press conference like everyone else does.
I, personally, was offended by Palin's use of the concept of blood libel and found it laughable when her lackey said the gun sights were merely "surveyor's marks." No one, including me, said there was a direct connection between Palin's violent imagery and this particular shooting. Her actions and words were used as an example of the harsh, violent tone of political discourse in the modern era. The fact that she frequently used gun themed rhetoric in a political context is beyond dispute. Her disingenuous talk about the First Amendment shows not only that she does not understand it, but is actually disrespectful of other's rights. She wants to quash any discussion of whether she went over the line by targeting Rep. Giffords, and attacks others for using their First Amendment right to criticize her (a frequent theme of Palin's).
Sarah Palin set the wrong tone in her video. She should have merely expressed her condolences for those who died and their families, and acknowledged that, maybe, her "don't retreat, reload" comments might have gone too far, and she wanted everyone to tone things down. A simple acknowledgment would have gone a long way toward diffusing this situation. But Palin, like her fellow wingnut cohorts, would rather attack others from a position of perceived persecution than acknowledge that her words (along with those of others) might have gone too far. A pledge to be civil toward her political opponents was glaringly absent from her video. It is a huge mistake, and automatically alienates more than 50% of the country. Including me.

UPDATE: Numerous Jewish groups are calling on Palin on apologize for using the Antisemitic term "blood libel" in her speech.
Posted by Dave Splash