There Are Consequences To Violent Political Rhetoric ("Don't Retreat, Reload") 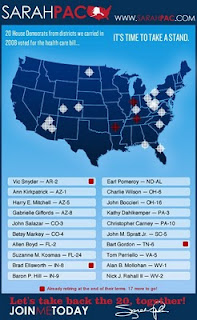 Good luck to Rep. Giffords in her recovery, and deep condolences to the victims and their families.
Posted by Dave Splash

i saw someone else sum it up best. Something to the effect of "If this was a school shooting, the student who posted the cross-hair map would be in custody right now".

Palin shouldn't get off for her hate-mongering.

'At the very least, a man who was rejected from the military and kicked out of college for his disturbing behavior should not have such easy access to guns."

"I hope this event and its aftermath will force the more extreme elements to tone it down."

Good luck to Rep. Giffords in her recovery, and deep condolences to the victims and their families."

The above are the parts of your posting with which I whole-heartedly agree, Dave. I won't even bother correcting your numerous factual errors, as it is tantamount to tilting at windmills.

Indeed, a speedy recovery to all who were injured by this inflamed lunatic, and sadness for those who lost their lives.

People such as Palin and Beck need to have their feet held to the fire, and it needs to come from within the Republican party as well as from without. If they are trying to push the country to some sort of breaking point, is this the kind of thing they want to see happen? I surely hope not.

The media will not do a thing to help relieve tensions. Instead it will continue to report on (and play up) whatever is most sensational... regretfully, that will continue to include inflammatory statements made by those prominent right wingers who have been most vocal.

In line with what Daneolson1971 says, drawing up a map that shows cross-hairs on congressional districts (and implicity, their elected representatives) is certainly somewhat akin to a deranged student making a "list" before going on a rampage.

But now that Palin has achieved such high celebrity status (much higher than Obama ever achieved before he became president... he was never a commentator for a "news" network, he never had a reality TV show, his family members weren't on "Dancing With The Stars", etc.), she gets treated like a celebrity. This allows her to get away with far more than Joe Six-Pack could.

Time for the double-standard to end. Time to call things like what Palin and Angle say what they are... dangerous, inflammatory rhetoric.

There is no liberal media. If there really was, the "tea party" would never have achieved its current "darling" status.

Bravo, Dave, you took the words right out of my mouth.

Not sure I get the tilting windmills comment, Paine, but I think this is a time for those on the right to look back at the things they have been saying about their political adversaries over the last few years and evaluate how much it has lead to the coarsening of the political dialogue in this country. It is okay to disagree, and perfectly appropriate to protest things one doesn't like; but the notion that bringing guns to political town halls is in any way appropriate is ridiculous (not sure how you could disagree), that saying the only motivation behind your opponents is to destroy and/or enslave the American public is not justifiable, and saying all the apocalyptic, armed revolution talk is not dangerous, would put someone safely in the extremist category.

Rational, sane people know that the rantings of Glenn Beck and his ilk are not to be taken seriously, but there are those like this guy in Arizona (and I don't know his listening habits, so I am not blaming Beck) who have their paranoid delusions reaffirmed with all the end of the country/end of the world talk by people like that.

Gun control has been off the agenda for nearly two decades. The Democrats have done nothing on the issue since, what 1994, when the assault weapons ban was passed. Yet, gun massacres are on the rise, restrictions on what types of guns are available are nearly non-existent, and all we hear from the right is "guns don't kill people." Actually, yes they do.

If the Republicans had done the responsible thing and kept the assault weapon ban in place when it expired in 2004, this guy in AZ could not have killed or wounded as many people as he did. That is a fact. He walked into a store, purchased a semi-automatic glock 9 pistol with little more than a 3 second background check (which many gun dealers ignore, knowing they will not be prosecuted), and bought high volume clips. And Arizona allows concealed guns without a permit! Contrary to right wing dogma, there were people in the crowd with guns, yet somehow, none of them stepped up and did anything. The right has been saying for decades that if more people had guns with them at all times, there would be fewer of these massacres. Hmmm...what happened?

More than a gun problem, the US has a mental health problem. In the constant quest for "smaller government," it is health care expenses (including mental health services) that are cut first. Sometimes, government spending is appropriate - even a lot of it. There is no private sector solution to this problem. It is a public safety issue. Without appropriate mental health services, many of the mentally ill who commit crimes are put in prison where their problems are exacerbated. They are then released, without so much as an appointment with a shrink, and unleashed on the public.

Increased, easy access to guns and a lack of mental health resources are the real culprits here. More so than the violent rhetoric of Sarah Palin, Sharron Angle and others. But the rhetoric makes it seem okay for these nuts to act out on their paranoid fantasies.