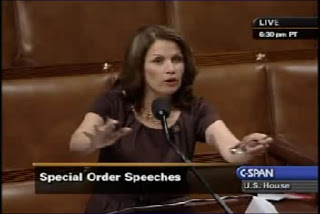 The tea party's favorite member of Congress, Rep. Michele Bachmann (R-MN), is apparently serious about making a run for the Republican nomination for president. I say...go for it. She's no more politically astute than her buddy, Sarah Palin, but she does work a whole helluva lot harder. Bachmann didn't quit in her first term as a member of Congress to chase down her dream of a reality show, and she does appear willing to do the hard work it takes to govern (not just tweet about people she doesn't like). I think she would be a great addition to the Republican list of potential nominees.
She will have to explain a few of her more outlandish (for lack of a better word) statements from the past, like:
"Carbon dioxide is portrayed as harmful. But there isn't even one study that can be produced that shows that carbon dioxide is a harmful gas." - April 2009
"Take this into consideration. If we look at American history, between 1942 and 1947, the data that was collected by the Census Bureau was handed over to the FBI and other organizations at the request of President Roosevelt, and that's how the Japanese were rounded up and put into the internment camps. I'm not saying that that's what the Administration is planning to do, but I am saying that private personal information that was given to the Census Bureau in the 1940s was used against Americans to round them up, in a violation of their constitutional rights, and put the Japanese in internment camps." - June 2009, arguing that Americans should not fill out their census forms
"I find it interesting that it was back in the 1970s that the swine flu broke out under another, then under another Democrat president, Jimmy Carter. I'm not blaming this on President Obama, I just think it's an interesting coincidence." - April 2009, arguing that Democrats cause swine flu (even though Republican Gerald Ford was president in 1976 when the flu occurred)
"I don't know where they're going to get all this money because we're running out of rich people in this country." - February 2009, claiming that Pres. Obama was trying to divert money from Republican districts to Democratic districts
There are plenty more, but once she gets on the campaign trail, I'm sure there will be tons of new ones.
Run, Michele, Run!
Posted by Dave Splash

I don't believe she would stand a snowball's chance of even getting the nomination, let alone winning the presidency, at least not in 2012.

What we can all hope she does is mount a third-party candidacy. If she could siphon away 10% of the vote from the GOP, it would make Obama a shoo-in.