On the Turntable (from The Dark Stuff) 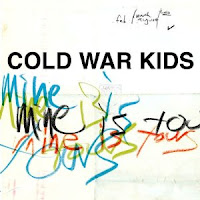 Cold War Kids - Mine Is Yours (Downtown/Interscope)
Cold War Kids' music has always confused me. It has been able to do so by brilliantly (and probably by accident) straddling the line between indie and mainstream rock. Millions of bands have tried, but few have succeeded at doing this. And really, if you remove R.E.M. and early U2 from the equation, I can only think of Weezer, Arcade Fire and The Shins who have. Lead singer Nathan Willett has a voice genetically created to sound good on the radio, and he could sing in nearly any type of group. He has a broad range that can hit the highest of high notes, and he utilizes his instrument very well. The fact that he performs with a quirky, stripped down, and sometimes spastic indie rock band is both the essence of CWK's unique sound, and of my general confusion about the band.
For its third album, Mine Is Yours, the band continues with the basic sound that has been working for them over the last few years. There are brief flirtations with different instrumentation - like the electronic elements on "Sensitive Kid" - but the song still sounds like Cold War Kids. There's no click tracks or studio trickery on a Cold War Kids' record, it's still just four guys in a room playing. Willett's lyrics sound deep, and they may very well be, but I can't make heads or tails of most of it. I like the way the words sound together, and I'm leaving it at that.
This is likely to be the year Cold War Kids break out in a big way (think R.E.M.'s Document from '87). The band has delivered an album that remains true to its origins and past work without repeating itself; and is presenting it with enough "production value" to make it work on the radio. (3 1/2 out of 5) 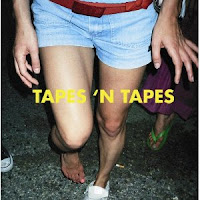 Tapes 'n Tapes - Outside (ibid)
The Minneapolis band Tapes 'n Tapes may be on the cusp of doing something that many, including myself, thought was impossible...making Minneapolis music relevant again. The city's glory days were the 1980s, when The Replacements, Prince, Hüsker Dü, Soul Asylum, et al. made Minneapolis the most exciting music scene since New York in the early 70s or London in the late 70s/early 80s. However, the scene has not been producing greatness at those levels for nearly two decades (exempting the Twin cities excellent hip-hop scene). Let's hope Tapes 'N Tapes are beginning of a new era for twin cities music, because the band's new album, Outside, is freakin' excellent and deserving of a wider audience.
I've been listening to the odd indie rock of Tapes 'n Tapes since its debut album back in 2006, which contained an ode to the music of my hometown, "Omaha." The band's sound incorporates healthy doses of bands like Pavement and Sebadoh, but mixes it with quirky rhythms and sometimes spastic vocals, a la David Byrne on early Talking Heads' records. The mix between the band's lo-fi sensibilities and their desire to have a thicker, fuller sound on record is realized to a much greater extent on Outside than on the band's disappointing second album, Walk It Off. It seems the extra time between albums for Tapes 'N Tapes did the band a world of good. Hell, the vacation would have been worth it for the essentially perfect song, "Freak Out," alone, if you ask me. The more I listen to these guys the more I want to listen to them again. (4 out of 5) 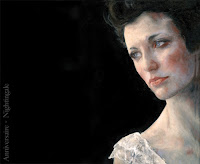 Anniversaire - Nightingale (self released)
Anniversaire is new Omaha band whose complicated brand of indie rock eschews guitar for cello, trades synths for an actual piano, and adds yet another layer to the already diverse Omaha indie music scene. Each tune on Nightingale sounds epic. They generally start slow, with singer Aaron Jordan's soft, high pitched voice (which often reminds me of Jeremy Enigk) barely getting the words out; by mid song, it will erupt and turn into a whole other animal, with drums and cello wailing and crashing like mad. The album's second track, "Every Line of Your Hand" is as good an example of the "Anniversaire sound" as one can find.
I like where these guys are going, but I'm not sure they are quite there yet. I did find that some of the songs seemed to blend into one another; and after listening to the record a number of times, I am still having trouble remembering which were my favorite songs and which ones just sounded like my favorite ones. (Side note: "Tele-visions" is my actual favorite track) For a debut album by a relatively unknown band, one can't help but be impressed with Nightingale. (3 out of 5)
(originally posted at thedarkstuff.com)
Posted by Dave Splash