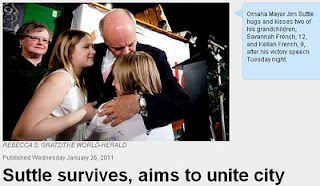 It was a close one, but Omaha Mayor Jim Suttle survived a special recall election yesterday. The Democratic Mayor has had a difficult time dealing with the financial mess left to him when he won election in May 2009. His solutions have angered many, but removing a mayor from office less than two years into his term is radical. Had he been removed, the city could have erupted into great anger and divisiveness. It would have cost the city millions of dollars to have another election, as well.


As many have pointed out, the proper remedy for dealing with an elected official that you don't like is to vote against him or her in the next election. Without a major scandal, a recall is not appropriate. This tea party inspired, and big business funded recall effort, was little more than sore loser-ism. The city's problems were not created by Mr. Suttle, and the issues confronting the city were known at the time of the last election. The people made a choice, and that should be respected. Hopefully, the folks behind the failed recall effort have learned something from this expensive and colossal waste of time and money.
Posted by Dave Splash