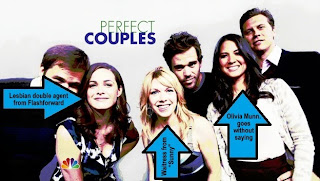 The TV networks have begun airing the mid-season "replacement" shows to fill in the gaps where canceled shows once resided. One show that I am (sort of) looking forward to seeing is the new NBC sitcom, Perfect Couples. First things, first. The name sucks. It's about as dumb as Friends. But, hey, that show lasted a decade, so what do I know? I have no idea who wrote the show, created the show, or produced it. That is irrelevant to me for this one. I'm giving Perfect Couples a chance for one reason. Olivia Munn. 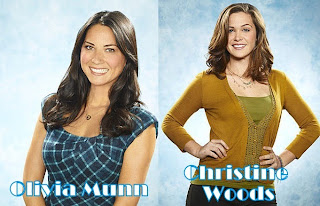 Olivia plays Leigh. That's pretty much all I need to know. But besides Olivia, there are some other persons of interest. First up is Christine Woods, who plays Julia. I really liked her as the secretly lesbian and secretly CIA, Janis Hawk on FlashForward (a sci-fi action show that was canceled way too soon). I have no idea about her comedic skills, but I already like looking at her, so that works to her advantage with me. The third female lead is Mary Elizabeth Ellis as Amy. Ellis definitely has comedy on her resume as she has played the coffee shop waitress on It's Always Sunny in Philadelphia for the last five years. Her part was small, but significant. If Perfect Couples doesn't work out, she can always go back to Sunny, as her husband is Charlie Day, who writes, produces and stars in the show. The three male leads look kinda familiar, but I don't really know any of them.
So, what is the show about? Imdb says its "Three couples have different ideas of what makes the perfect relationship." Sounds kind of generic; but how many times have you seen the cable guide description of a movie that sounded good, but it actually sucked? Happens a lot. Maybe, in this case, we get the reverse. Olivia Munn is a bit of an "it girl" at the moment, and the show is being sandwiched in between some already popular shows, so I anticipate a big rating to start. The true test will be week number two.


I'll be tuning in to give it a try. I can't imagine it could be all bad considering the cast, but I am reminded of Studio 60 On the Sunset Strip, when I say things like that. Perfect Couples airs tonight on NBC at 7:30 central.


UPDATE: NextRound.net has assembled what it calls the "mega" gallery of Olivia Munn pics. You're welcome.
Posted by Dave Splash