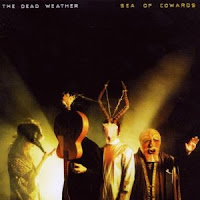 20) The Dead Weather - Sea of Cowards. To many, The Dead Weather will always be a mere side project for Jack White of The White Stripes. That's too bad, because TDW is a great band in its own right, and the music on Sea of Cowards (the band's second album) deserves far more attention than just that from White Stripes completists. White plays drums in this band, and shares vocal duties with Alison Mosshart (of the criminally under-appreciated band The Kills). The songs are bluesy and strange, and clearly owe a debt to the late Captain Beefheart. At the rate he is going now, if Jack White keeps releasing great records with both The Dead Weather and The Raconteurs, fans may start to consider The White Stripes the side project.
19) Surfer Blood - Astro Coast. Talk about a band coming out of nowhere! I saw these Floridians last Spring as the opening act for Mission of Burma, and was shocked at how freakin' young they looked. No one looked older than 18. But the music they make - a nice mix of 50s/60s surf music and bands like Weezer - sounds like it was created by guys who have been on earth a bit longer. Surfer Blood's debut album, Astro Coast, created a huge buzz in the usual indie circles (i.e. Pitchfork), and elevated these guys to the top of the indie heap. Fortunately, I think Surfer Blood is in it for the long haul. Though the short, poppy-er songs get the most attention, do not overlook tunes like "Alaska" and "Slow Jabroni." When the boys slow it down a little bit and stretch their music chops, the real magic of this band comes through.
18) Harlem - Hippies. I see a fair amount of concerts. I think that has been well established. Because of that, I am rarely surprised by anyone I see perform. The live set usually confirms what I already felt about a band. With the Austin, Texas duo Harlem, I never really heard them until I saw them perform - even though I had been playing them on my radio show for more than month prior. I just kinda connected with the two goofy garage rockers from the moment they took the stage and announced how baked they were. Not too baked to be able to play multiple instruments, however. The two vocalists frequently switched between playing guitar and drums. I am always impressed when bands do that. Hippies is a fun record, and would sound great as background music at any party being thrown by someone under the age of 50.
17) The Thermals - Personal Life. On their fifth album, the Portland, Oregon trio, The Thermals mix it up a bit. The sound isn't too different than the last two Thermals records, but the content of the lyrics is. Rather than singing politically charged, catchy punk rock, the band now focuses its lyrical attack on the personal. Makes sense. Political music is mostly angry, and maybe they are tired of being angry. Who knows? Whatever the thought process was, Personal Life is yet another strong collection from this great band. Death Cab For Cutie's Chris Walla produced this one, and he doesn't tinker too much with all those studio knobs. He simply captures the band playing the songs in a big, open room, and The Thermals do the rest. Nice work.
16) Les Savy Fav - Root For Ruin. I fully admit that Les Savy Fav isn't the easiest band to like. The group's DC-inspired sound is an acquired taste, to be sure; and the bizarre, sometimes unhinged on stage antics of vocalist Tim Harrington make some people a little uncomfortable. But, friends, you need to get past all that. On its fifth album, Root For Ruin, Les Savy Fav has streamlined its sound a bit (just a bit) and delivered what they used to call in the old days a "career defining" work. But since having a career in music is becoming increasingly difficult, and Les Savy Fav has already gone on hiatus once before, I suggest familiarizing yourself with these guys while you can. If you don't get the song "Lips n' Stuff" stuck in your head by playing it over and over, I question your taste. 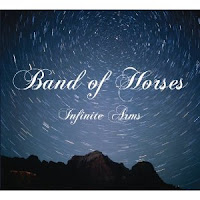 15) Band of Horses - Infinite Arms. Though the line-up of Band of Horses only features one guy from the original band - singer/guitarist Ben Bridwell - you'd be hard pressed to explain the difference between Infinite Arms and BOH's 2006 debut. The band just has a consistency to its music. Band of Horses' mix of Gram Parsons style country, folk music, and middle-period Replacements delivers the goods for me on almost every track. There is a bit more of a sheen to the production on Infinite Arms, but that generally comes with major label support. I can't really say it makes the album less enjoyable.
14) Beach House - Teen Dream. I have to admit that prior to Teen Dream, I had never heard of Beach House. It's too bad, actually, because based on Teen Dream, it would seem that the music of Beach House is right up my proverbial alley. Droning keyboards, dreamy vocals, and atmospheric production make this band one of the more interesting additions to the indie world in the last few years. The group calls Baltimore its home, though singer Victoria Legrand was born in France. Beach House is mood music for me, and not always good mood music, if you know what I mean.

13) Danger Mouse and Sparklehorse - Dark Night of the Soul. DJ and producer Danger Mouse and Mark Linkous (aka Sparklehorse) collaborated once before on some tracks for a Sparklehorse record a few years back. It worked out so well that the two decided to collaborate on an entire album. The duo wrote songs together and brought in guest vocalists like Frank Black, Julian Casablancas (The Strokes), Wayne Coyne (Flaming Lips), James Mercer (The Shins), and many others. Once completed, the project was put on the back-burner by Capitol Records, and many wondered if it would ever see the light of day. Sadly, it was the suicide of Linkous last Spring that finally prompted the release. The album is fantastic and a real testament to what these two talented men could have kept creating if situations had been different. There are a number of limited editions of this collection, and some feature a photo book with pictures taken by director David Lynch (Lynch also contributes vocals to one track, as well). Dark Night of the Soul is an excellent collection, and it's too bad these guys will never be able to work together again.

12) Vampire Weekend - Contra. NYC buzz band Vampire Weekend delivers another set of impressive indie pop that still sounds like strong outtakes from Paul Simon's Graceland album. Apparently, there are still loads of people yearning for that style of music, as Contra debuted at #1 on the Billboard Top 200 Album charts, and it was recently nominated for a Grammy. The band deals with some different topics lyrically on this album (no songs about an "Oxford Comma" for instance), with the most prominent theme having to do with fighting misconceptions and feelings of guilt over presumed privilege. It can be heady stuff if you listen closely. However, it is more than possible to just throw this record on and dance around the room, completely ignoring what the songs are actually about. Whatever works, right?
11) The Walkmen - Lisbon. Over the band's ten plus year career, The Walkmen have seen a lot of ups and downs. They have always been critical darlings, yet somehow a real buzz has never followed. This has started to change with the band's sixth album, Lisbon. Though the record is a tribute to the city of Lisbon, I can't really figure out how. But that hardly matters because the tunes on Lisbon are excellent, regardless of what they are about. "Woe Is Me" is probably my favorite track, but "Juveniles" and "Blue as Your Blood" rank pretty high, too. The album has a sparse, open feel that is not too cluttered by excessive instrumentation or production gimmicks. My favorite Walkmen record is still 2004's Bows + Arrows, but Lisbon comes as close to delivering that level of greatness as any record of theirs since then.
Posted by Dave Splash