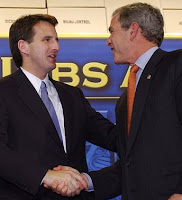 Minnesota's Republican Governor and 2012 presidential contender Tim Pawlenty has some serious explaining to do. Personally, I doubt he will be able to explain away his latest (and greatest) screw up to the American people.
Two years ago, Mr. Pawlenty issued a rare pardon. Pardons, in and of themselves, are not that rare, but issuing a pardon to a convicted sex offender is. Pawlenty pardoned Jeremy Giefer who was convicted in 1994 of having sex with a 14 year old girl.
Most governors would not go anywhere near pardoning a sex offender. Pawlenty did, and his reasoning is even more disturbing than the pardon itself. Here is a quote from Mr. Giefer's pardon request: "I was told May 2007 that I could no longer coach my son's baseball team because I was considered a sex offender. We opened a towing company October 2004 and we were told that if we would like to expand our business and tow for the state Patrol you need to have a clear record. Also my wife has worked in the childcare field for 11 years and she was hoping to open our home to care for children but she is not able to do that since I live in the home."
He needed to be pardoned so he could have a child care business in his home?! A convicted sex offender?! And Pawlenty thought that rationale was compelling enough to pardon the guy?
Now Mr. Geifer is accused of sexually molesting his own daughter. While he denies his molestation was sex, he does not dispute the bulk of the accusation. The girl said the abuse began at age nine, and continued until as recently as this month. The girl, known only as CG in the complaint, described the abuse, "C.G. stated that when she gives her father a blow job, he doesn't ejaculate but finishes in a towel. She also indicated that Giefer would come into her room when she was sleeping and he would come into her room and have intercourse with her. He also does not use a condom. C.G. stated that Giefer put her on birth control when she was 15 years old."
That is about all the disgusting detail needed. Here is Geifer's attempt at a defense, "Yes, Giefer told a detective, he had put his daughter on birth control pills. Yes, he had grabbed her breasts, but 'it was just messing around.' Yes, he had exposed his penis to her, but it was 'accidental.' And yes, while on top of his daughter in her bed while 'wrestling,' he had kissed her neck and stuck his hand inside her shorts and touched her bare vagina."
This is who Tim Pawlenty thought was deserving of a pardon so he could open up a daycare center. Nice knowing ya, Tim.
Posted by Dave Splash

Holy fuckamoly, I did not know the entire story of this pedophile until reading this. Pawlenty had to know the guy personally to fall for his horseshit, that is the ONLY rationale I can think of to excuse Timmy's actions. Couldn't stand his sanctimonious ass before and now I would love to see him squirm away from political office forever.