Another one for the ages, my friends! I hope you sense the sarcasm here. This last weekend was a doozy. I had a very trying week last week in both a personal and professional sense. I finally came to the realization that I have to leave my job - sooner rather than later. I spoke about it with my boss, and it looks like I will transitioning out of my current position early Spring of next year.
By the time Friday night rolled around, I was in no mood to do any celebrating, however. I stayed in and watched episodes of Star Trek Voyager. I often forget just how great that show was. Perhaps not as good as Next Generation, but far superior to Deep Space Nine, which I had a hard time watching. I'm still back in season two, so Jeri Ryan has not yet joined the cast. She was definitely a highlight of the series.
I finally got a blu ray player, so I was able to see what all the fuss is about. I was impressed with the quality. My first blu ray experience was with Get Him to the Greek, which does not really need to be seen in Hi-def. Considering how much I hate Russell Brand, I actually liked the movie. Jonah Hill, as usual, was hilarious.
Saturday was reserved for Nebraska football. The Huskers were playing their long-time rivals from Oklahoma for the Big 12 Championship. Since this is the last year that Nebraska is in the conference, it was important to go out with a win. In addition, it could not have been more fitting to have the last Big 12 game be against OU. The Sooners have been a consistent thorn in the side of NU for the better part of the last 40 years. Sadly, the game did not go well for Nebraska.
Nebraska's offense struggled for most of the game, as it had been for much of the season. We started off strong with a couple of quick TDs, and it looked like things might be going Nebraska's way this year. But QB Taylor Martinez's interceptions and fumbles allowed OU to catch up and ultimately beat Nebraska. Martinez is a talented guy, but his is a perfect example of why Freshmen don't usually start in college football. His youth and inexperience was behind a number of his errors. In all fairness, he was suffering from two injuries, as well. Kudos the NU defense for a job well done. But Nebraska is in serious need of a new offensive coordinator. The Huskers will now be playing in the Holiday Bowl against Washington. Lame.
After the loss, I didn't feel much like going out - again. So I sulked around the house instead. I cleared out my DVR of some stuff I hadn't watched yet, and went to bed.
Sunday morning is usually reserved for church working on my radio show. This week's was easy as I was previewing cuts from the Top 50 albums of 2010 for my two countdown episodes that are airing Dec. 12 & 19. I was actually done by 10:30 am which gave me a little time to tweak my fantasy football team before my first playoff game. 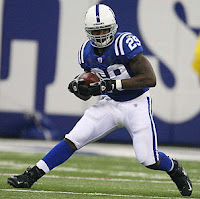 My season started off so well. My team, Trailer Park Boys, was 8-0 and the entire league feared playing me. But a couple of injuries to key players (in this case Joseph Addai) sent me on a serious losing streak. I still made the playoffs, which is good for my first ever season playing FF. Sadly, though, the Boys lost yesterday. My season ended at the barely respectable 8-5. I'll get 'em next year!
In "real" football, it was also a mixed bag for me. The Packers won convincingly against the San Francisco 49ers, but the Bucs lost to Atlanta in a tough one. Green Bay is a definite for the playoffs, but Tampa...
My show went pretty well last night. You can find the playlist posted here. I only had one obnoxious idiot call in during the entire two hours!! I think that's a record. Usually, when I get home from the show, I watch that week's episode of Dexter before going to bed. However, last night I decided to watch the season finale of The Walking Dead instead. I don't think I mentioned The Walking Dead on the blog before. The show was recommended by a friend, and despite not being a horror or zombie fan, I ended up really liking the show. Last night's season finale, TS-19, was incredible, and opened up a whole series of possibilities for next season. If you have not watched this show, I highly recommend you head to AMCTV.com, and watch it online.
I suppose the only other thing worth mentioning about my TV filled weekend on the couch was Katy Perry's non-animated appearance on The Simpsons last night. She appeared as part of the Simpsons' annual Christmas episode, but she was not drawn into the show. Instead, she appeared with the characters as puppets, which of course allowed the characters to hug and grope Katy in the way she demands to be hugged and groped.
So, that's that, my friends. You're all caught up with me. I hope your weekend was a little more eventful than mine.
Posted by Dave Splash