Being laid up for nearly two weeks meant I had a lot of extra time to watch TV and movies. And over the last two weeks, I watched plenty - mostly bad, unfortunately. Here's a recap of what I can remember seeing while stuck on the couch.


Right off the bat, I am forced to mention an utterly horrible movie I suffered through called Mr. Fix It. I streamed it on Netflix because it starred Alana De La Garza. That matters because I had just watched a lot of Law & Order (a lot of Law & Order), and I have always had a little crush on her Connie Rubirosa character. I wanted to see if she had done anything else, and found this "comedy" that also starred David Boreanaz (Agent Booth on Bones). Wow, this was bad.
The movie focuses on Boreanaz's character who runs a business helping men get their ex-girlfriends back. He is such a jerk that these ex-GF's now see their former flames in a better light. Business does not seem to be too good, as he lives in a shitty apartment, drives a shitty car, and basically lives only a step above poverty level. De La Garza's ex hires him to woo her and dump her. But along the way, Boreanaz ends up falling for her, and feeling bad about his line of work. In the end, though, we learn that De La Garza works as a "Mrs. Fix It," and she was hired by his friends to teach him about love. Naturally. As beautiful as I might find Ms. De La Garza, even she cannot make this movie watchable.
Next up is a 1998 thriller (sort of) starring Vince Vaughn called Clay Pigeons. This flick was decidedly better than Mr. Fix It, despite being a pretty mediocre film. It is set in a small town, and begins with Clay (played by Joaquin Phoenix) being confronted by his best friend for sleeping with his wife. When the friend takes his own life, he does it in a way that makes Clay look responsible for the death. This begins a cycle of Clay covering up murders that he did not actually commit. Turns out, Clay's new best friend (Vaughn's character) is a serial killer and keeps killing people close to Clay. Janeane Garofalo plays an FBI agent brought in to solve the case. Spoiler alert: Vaughn gets caught in the end. He didn't go down easily, but they did ultimately get him.
The acting was pretty good in this movie, and the cast is strong. But overall, it was just pretty average.

Most people have probably already seen Steven Speilberg's Munich, but not me. I've had the DVD in my collection for years, but for some reason, every time I went to put it on, something else seemed more appealing. I already knew the basic storyline of the film: Palestinian terrorists known as "Black September" killed a number of Israeli athletes at the 1972 Olympics in Munich, Germany, then a secret crew of Israeli Mossad agents tracked down those responsible and killed them.
The film delves a little more deeply into who the Israeli men were, and what their lives were like before taking this secret assignment. There are also strong suggestions in the movie that some of the "targets" were not actually those responsible for the Munich murders, but Palestinian activists and/or terrorists who found themselves on the wrong side of the Israeli law. It was left quite vague. Most of the men ended up dying themselves, and were buried without any fanfare since their mission was a secret and was not officially acknowledged by the Israeli government.
I liked the movie even though I don't think it was one of Speilberg's best. Seeing how covert stuff was done back in the 1970s was pretty interesting, and the ease with which people were able to travel throughout the world back then is enviable. This is definitely worth seeing if you have not. 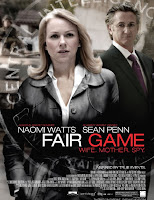 For my first night out, I went to see something still in the theaters (just barely). I caught the new Sean Penn/Naomi Watts movie Fair Game. This is another movie based on real events, but unlike the 1972 Olympics, I have very clear memories of the real events portrayed here. Fair Game tells the story of undercover CIA Operative Valerie Plame. Plame's nearly 20 year career in the CIA was destroyed when she was outed in the media by various members of the Bush Administration. The outing was retribution for an op-ed written by Plame's husband, Joe Wilson, wherein he showed that one of the underlying rationales for the 2003 Iraq War was untrue.
Much of the film showed Plame's life before she was outed. She worked in weapons counter-proliferation in the Middle East, and had numerous ongoing operations in places like Iraq, Afghanistan, Malaysia, and Pakistan. Her friends were oblivious as to her real job. Mr. Wilson, who once served as Ambassador to Iraq in the first Bush Administration, was the last American to speak with Saddam Hussein prior to the 1991 American invasion. His expertise on the country of Niger got him sent by the CIA to investigate whether claims of large sales of yellowcake (used in the construction of a nuclear bomb) between Niger and Iraq were true. They weren't, and all future references to yellowcake were removed from presidential addresses. Nonetheless, the Bush Administration (led by Vice President Cheney and his Chief of Staff Lewis "Scooter" Libby) sought to destroy the Wilsons for telling the truth. Once outed in public, Valerie Plame could no longer be an effective covert operative, and her career was done. To distract the public from the illegal act of outing an undercover agent, the Bush Administration frequently told the media that Plame was little more than a secretary.
The destruction of Valerie's career, and the public thrashing the family was getting from the right-wing in America, put a huge strain on her marriage, and on her husband's consulting business. A lot was made of the fact that Wilson wrote the op-ed without telling his wife, and frequently went on television to attack the administration despite her requests not to.

At the end of this saga, Mr. Libby was convicted of perjury, but Pres. Bush commuted his sentence. He never spent a day in jail. The movie is likely to be seen through a partisan lens by those who lived through the reality. I hope that since some time has passed, those who trashed Valerie Plame, denigrated her service to the country, and tried to paint Joe Wilson as a traitor have realized the error of their ways. The smear of the Wilsons, for nothing more than telling the truth, is a sad chapter in American history. The film, overall, was good, but since I already knew the story very well, there was little actual suspense in this suspense-thriller. Oh well.
I'm sure there were others that I saw, but I may have been a little to "medicated" to really remember.
Posted by Dave Splash