Defending the Indefensible with the Stupid (UPDATED)

Last night on Rachel Maddow, guest host Bill Wollf had Princeton professor Melissa Harris-Perry as a guest on to talk about the renewed controversy surrounding Michael Vick. My feelings on Vick, his despicable crimes, and the President's mistake in using him as an example of a felon deserving another chance are well documented. But my jaw just about hit the floor when the professor (who I have seen on various shows before and have always thought she seemed an intelligent and reasonable person) veered into a discussion about Vick being the victim due to hundreds of years of oppression of blacks at the hands of dogs. At least I think that's what she was saying.
“There are some complex issues at stake whenever you are talking simultaneously about African Americans and talking about issues of animal rights,” she told Wolff. I must admit that this seemed kinda silly. Certainly, back in the slavery days, blacks were treated as little more than animals. I am very familiar with our horrible history when it comes to blacks. I would further concede that dogs were used to disrupt civil rights protests, and probably during prison interrogations, as well. But this is not unique to blacks. Anyone remember Abu Ghraib? Have you ever seen any footage of a DEA raid?
But this is 2010, and Mr. Vick is among the most elite of all Americans - black or white or whatever. He is a professional athlete. What the hell does the use of dogs to thwart protests decades ago (long before Vick was even born) have to do with Michael Vick's obvious sadism towards animals? There are likely hundreds of thousands of black families with pets, and they don't abuse, torture, strangle, or electrocute them. How come they don't harbor the same resentment toward animals that Vick and his band of thugs do? And did anyone, including the professor, stop to point out that the dogs used in interrogations or other police work are trained by people and are acting on their command. The dog has no choice in the matter. If the professor had tied the issue to the police and the directions of the trainers, then maybe she would have had a better argument. Although anyone who has seen photos of Vick's victims will not buy it.
Later on, via twitter (compiled by Mediaite), the professor attempted to clarify her argument to make it seem...well...less ridiculous. "So many black people have experienced what seems like callous indifference to black suffering from same people who adore/protect pets" is from one of her tweets. Again, I think she is venturing off into the absurd, and assuming that the attitudes of the average white person toward blacks is no different than it was in 1860. I'm sorry Ms. Harris-Perry, but people have changed since then. For the better. Much better. Remember just a few short years ago when we elected the first black president? And he has a dog.
If this were 1964 and a columnist got outraged by the way LBJ held his dog's ears, yet showed indifference to blacks being hosed down like an animal in the street during a protest, she might have something. But, even still, I doubt anyone would, in any context, defend the actual actions of Michael Vick. 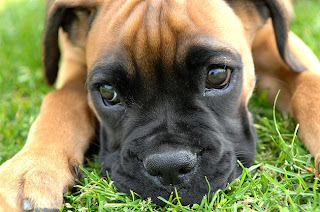 I have never used the concept of the "race card" in any argument, as I think it is a stupid and irrelevant concept. Pointing out racist behavior or statements isn't playing a political card, it's pointing out racist behavior and statements. But, in this case, I really do think the professor is purposely inserting race into an argument where there really shouldn't be a racial component. No one should understand the actions of Michael Vick as anything but the behavior of a privileged sadist who got off on hurting defenseless animals. Anyone who does not see a problem with that and thinks one shouldn't go to prison for that behavior has a little less humanity than most of us.

UPDATE: The professor, responding to a tweet of this post, directed me to something she has written that further explains what she was trying to say. I told her that I think I understand what she is trying to say, but ultimately, I think she is over-intellectualizing basic sadism from a privileged professional athlete. It is not really a race issue. I would have the same anger toward Brett Favre if he did the same thing. Would the black community have a different reaction than whites if it was Favre?
Posted by Dave Splash

I agree completely with your posting here, sir! :)

Happy New Year to you, as well.