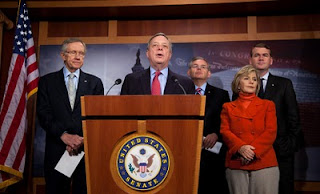 As much as I generally loathe the US Congress (especially the Senate), I am forced to give some credit where credit is definitely due. Both the House and the Senate passed legislation ending the prohibition of gay people serving in the military. In a Senate vote of 65 to 31, the Senate passed the House bill and have now sent it on to the President for his signature.
Don't Ask Don't Tell, which was originally meant to be a compromise between an outright ban on gays serving and open service, actually caused more military dismissals than the original ban did. It had to be ended. It should have been ended many years ago, but the Republican Party is still stocked to the brim full of bigots, so naturally, they'd rather allow criminals and the mentally retarded in the military instead of qualified gay people.
Every Democrat voted for the bill except for the "mysteriously" missing new Senator from West Virginia, Joe Manchin. The newly elected Manchin went to a Christmas party instead, which shows he has no political conviction at all. He'd rather skip a potentially controversial vote, it would seem, than do his job. However, with 70% approval from the public for an end to DADT, voting in favor hardly seems controversial.
Anyway, kudos to the Democrats in the Senate (and the handful of Republicans who finally showed some political courage and independent thinking) for ending this prejudicial ban. We will look back on this day in just a few years and wonder why gays were ever banned from the military in the first place.
Posted by Dave Splash

I think now that this legislation is law, congress should repeal the horrible segregation that exists between men and women in the military too. After all, sexual attraction is no longer an issue there either… right?