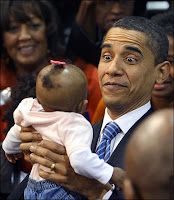 For those who have written off President Obama as a sure loser in 2012, here's a small dose of reality for you.
According to Gallup:
President Obama job approval rating November 21, 2009: 48%

President Obama job approval rating November 21, 2010: 47%
With the margin of error, the numbers are a tie. At the same point in both of their presidencies, Reagan and Clinton's numbers were lower.
So, just because the media has decided Obama is toast, the American voter still has something to say about it.
Sarah Palin's new TLC reality show lost 40% of its audience after its premiere episode. 40%.
Posted by Dave Splash

Dave, those numbers are VERY encouraging. It seems that "hopey-changey thing" is workin' for a lot more of us than some of these folks would like us to think. They are trying to do a big psych job, but apparently only having limited success! This is good.

"You dismiss the Tea Party at your own peril."

Yeah, well, you guys dismiss Obama at YOUR own peril. Look what happened in 1996. You got your big "Republican revolution" in 1994, and declared the Democratic party dead. And then what happened? By overplaying your hand, you got Bill Clinton re-elected!

This will happen again. You will overreach, overplay your hand again by trying to do too much too fast, by being too draconian, etc. and by saying NO to the president far too often. And when Obama is re-elected it will make your leaders so mad they will open up all kinds of investigations and waste millions of tax dollars on politically-motivated witch hunts.

Go ahead and run someone like Sarah Palin in 2012, and just watch how fast the independents run back to the Democrats. The independents seem to be a generally smart group of voters. They went away from too much spending in 2010, and in 2012 they will move away from CRAZY! 8-)

I agree with everything you said except "independents seem to be a generally smart group of voters."

I don't see how they could go from supporting Obama in 2008 to supporting clueless teabaggers in less than two years. I think they need to settle down. Change can't come in just two years, no matter what direction.