A Quick Review of 'Wristcutters A Love Story' 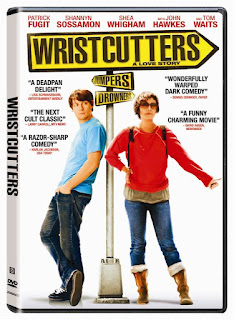 I watched a really bizarre, but thoroughly enjoyable, movie last night called Wristcutters: A Love Story. To be honest, I don't really remember why I put it in my Netflix queue, but it arrived yesterday, so I gave it a shot.
The movie is a dark (very dark) comedy starring  Patrick Fugit, who you probably remember from Almost Famous. It opens with Fugit's character, Zia, cleaning his messy apartment and then killing himself. Though it is not shown, he was apparently distraught over a recent break-up with his girlfriend, Desiree.
Rather than going to heaven or hell or wherever you imagine you go after death, Zia wakes up in a world that is pretty much exactly like the one he left behind...only it is slightly worse. It is a world occupied exclusively by people who committed suicide. He gets a crappy job at Kamikaze Pizza, lives in a crappy apartment with a crappy roommate, and spends much of his free time in a crappy bar drinking crappy flat beer.
After a chance encounter with someone he knew from his old life (who recently killed himself), Zia learns that his ex-girlfriend also committed suicide. She did it about a month after he did. So, Zia and his new Russian friend, Eugene, hit the road in an attempt to find her. Eugene killed himself on stage with his band by pouring beer all over his electric guitar and electrocuting himself. 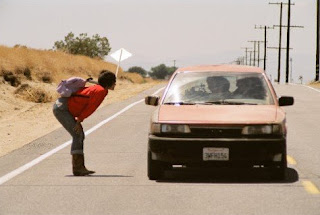 While on the road, they meet a hitchhiker named Mikal. She is looking for the people in charge (P.I.C) of this after world because she says there has been a mistake -- she didn't actually kill herself. Throughout the rest of the film, Zia, Mikal, and Eugene travel the side roads of this desert-like place they are forced to live in, and come across some very interesting characters. Most notable among them is Kneller, played by Tom Waits.
I won't ruin the movie with a spoiler here, but I will let you know that Zia does find Desiree, but he probably wishes he hadn't. Wristcutters is, to my knowledge, the first "suicide comedy." It's not for everyone, to be sure, but it is a good movie. It's more like a road trip movie than anything; and despite the fact that every character (pretty much) killed themselves, it was not really a sad movie. If you have Netflix, add this one to your queue. It's worth 90 minutes of your life.
Posted by Dave Splash

You should also consider checking out the new Edward Burns flick, NICE GUY JOHNNY. Has a shitload of heart, and a ton of soul. Kind of along the lines of Garden State, perhaps. If you like Ed Burns humor and relationship perspectives, I'm sure you'll agree.