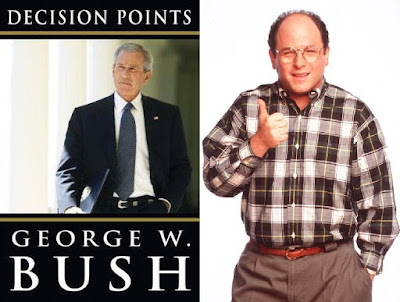 Former (still thankful for that) President George W. Bush has just released his new novel memoir about his time in office, Decision Points. As they did for his eight years as president, the media is all over this and hyping his every word.
I watched a little bit of Bush's interview with Matt Lauer the other night. W is still in just as much of a Bushie bubble as he was while president. He still disregards inconvenient facts and replaces them with his own, detached from reality, "beliefs." He still refers to what his mindset was at the time, and inserts nothing into his meanderings that might be construed as reflection. Or fact-checking. His discussion of the beginning of the Iraq War is a perfect example.
He expressed his anger and disgust when no WMDs were ever found in Iraq, yet he clings to his original justification for the invasion by citing a "tyrannical mad man who wanted to attack America with weapons of mass destruction." Mr. President, what weapons? You admit there were no WMDs, yet you still say you were right to invade, based on fear of the weapons that don't exist! You can't have it both ways.
Clearly, Mr. Bush is still caught up in the same web of lies that dogged his administration. But how is he  still able to cling to them all these years later? I think he can do it because he is just like George Costanza from Seinfeld.
In one episode, Jerry was forced to take a lie detector test. He wanted to figure out how to beat it. So, he asked the best liar he knew...George. George's advice? "It's not a lie if YOU believe it." You can lie all you want if you can  just convince yourself.
That, in a nutshell, is George W Bush.
Posted by Dave Splash

Yeah, George lied to the world about WMD's, and most of the world, congress, the UN, and even Democratic presidential candidates lied right along with him.

Dave, you need new material that is fact based, my friend.

You guys still cling to the same tired, talking points.

It's called selective reading of intelligence, Paine. The Bushies used it. They intentionally ignored anything that didn't fit the narrative they had already created. And there was mountains of information to the contrary.

Despite saying it repeatedly, there NEVER was even a shred of evidence tying Iraq to 9/11, yet the Bushies hyped the war as payback for 9/11. Exploiting that tragic event for political gain is disgusting, and I don't care who you are.

Anyone - anyone including John Kerry and Hillary Clinton - who supported the Iraq invasion was wrong. Wrong on the facts and wrong on the outcome. And anyone who - eight years later - can't come up with a better rationale for war than the bogus one used at the time, is pretty much a joke. And yes, a liar.

There have already been thousands of documents released proving that the Bush Administration knew before the invasion that there were no weapons. They still didn't call it off.

When you tack on all the torture and detainee abuse (which you can't say "but Democrats did it too"), Bush was the most deserving president of impeachment in our history.

Without a doubt, he is the least competent and most dishonest person ever to hold the job.

And for someone who says he wasn't a "Bushie" you sure do extend a lot of effort defending him. Just sayin'.

Interesting. I don't ever recall the administration ever saying that the Iraq war was payback for 9/11. Where do yo get this stuff?

Splash, it is you that are ignoring the facts that are contrary to your preconceived notions.

We KNOW that Saddam had WMD's that are still unaccounted for to this very day. (Unfortunately, we sold many of them to him to fight Iran in their war during the 80's.) Now, whether those WMD's were sold, hidden in Syria, or God knows what, they did exist and were not accounted for with the UN inspections team.

That is why the UN issued its resolution for mandatory inspections, which Saddam made a show of complying with while playing games all the while.

That is why congress, including Democrats, authorized any means, upto and including force, for the US military to make Iraq comply with that UN resolution.

That is why many of our allies sent troops or other means of support in the war against Saddam.

And that is why your "facts" come across as lunacy, sir.

Lastly, while I do indeed defend much of what Bush did with foreign policy, I despised what he did with domestic and economic policy.
That gives him 1 of 3 big areas he got right, in my opinion. 33% is an "F" and the reason why I was not and am not a Bushie.

I defend Obama with his hunting of terrorists along the Pakistan border with drones too. That hardly makes me an Obama supporter, as you well know.

You are engaging in a Bush like selective reading of history. The administration continuously tried to tie 9/11 to Iraq, they did it for years, until 2009 when Cheney reluctantly admitted there was no connection. All the "mushroom cloud" talk, and all the comments about not allowing a second 9/11, and the made-up nonsense about Iraqi intelligence agents meeting with Al Qeda were all used to galvanize the anger Americans had about 9/11 and put it toward Iraq. They suffered the brunt of our retaliation for 9/11. They did sell the war as payback.

Saddam had weapons in the early 90s, which were destroyed. In order to not look weak in the eyes of Iran and other hostile neighbors, he kept up a pretense of having weapons. Our intelligence services were almost unanimous in the conclusion that he didn't have them before the invasion. The Bush Administration created its own separate intelligence apparatus designed to find what they wanted to find - a connection to 9/11.

The UN never authorized war or an invasion. They authorized inspections. Those inspections yielded nothing. But before the results were even back, the administration was already moving military assets out of Afghanistan and into Kuwait for an imminent invasion of Iraq. The inspections were simply used as cover to give the US enough time to get ready for the war we already decided to start.

You even admit that Saddam complied with the inspections. Were these "games" you say he played denying he had weapons? You know, maybe he was telling the truth. Actually, we know he was since there were NO weapons. (cont'd)

As for the silly claims that they were moved to Syria, how did no one notice the movement of massive stockpiles of weapons across an international border when the entire world was watching Iraq? Why do Bush and Cheney not use this argument? Why has no one ever shown anything resembling proof that there are Iraqi WMD in Syria? I know why, because that was made up by some right wing talk show host.

Most of our allies had little to no involvement in the war. Some countries contributed as little as 3 soldiers to the effort (true fact). This was an American and British effort almost exclusively. Most other countries prohibited their soldiers from being in combat. France and Germany knew the case for the war was bullshit and refused to participate. Of course, that meant the right had to attack them, too. Remember "freedom fries"? Yeah, I'm sure the French are still stinging about that one. Actually, since they were right all along, probably not.

You can keep pointing to Democrats who supported the bogus war, and I will respond the same way I always have: they were wrong. They were gutless and cowardly and went along with the majority. It was shameful. Hillary Clinton is not president now because of that. You think she's happy about her support for Bush's boondoggle?

Bush was a joke as president and the Iraq War was the greatest foreign policy mistake in American history. You guys on the right can continue to re-write history and repeat the same discredited nonsense from 6-7 years ago, but fewer and fewer people believe it anymore.

Bush decided to invade and then cooked up a justification for it. An objective analysis of the facts could only come to that conclusion.