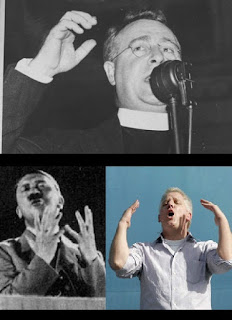 More and more Jewish organizations are beginning to condemn Beck for his comments about Mr. Soros and his frequent citations of anti-Semities as sources for his rantings. Rabbi Steve Gutow of the Jewish Council for Public Affairs said this about the current hit piece on Soros, "In an effort to demonize a political opponent, Beck and Fox News scurrilously attacked George Soros, a prominent Jewish philanthropist and Holocaust survivor. No one who truly understands 'the sensitivity and sacred nature' of the Holocaust would deliberately and grotesquely mis-characterize the experience of a 13 year old Jew in Nazi-occupied Hungary whose father hid him with a non-Jewish family to keep him alive.” Beck would, and he does.
Posted by Dave Splash

As Soros is a self-avowed atheist, would he even consider himself a Jew, even culturally?

He has been convicted of insider trading in France, has decimated the British Sterling, has been branded by the Malaysian government of economic terrorism and has said in his own words how he enjoys manipulating "oppressive governments" like America's by harming their currencies.

Yes, poor George Soros is simply a good Jewish philanthropist who has no alterior motives for destroying capitalism while investing heavily in gold and emerging nations so as to bring about one world governance.

His contributions in the untold millions (billions?) for the Tides Foundation, Moveon.org, Media Matters and many other progressive organizations to get his word out would terrify you if he were a conservative.

That rant of yours even sounds like a cut and paste from may Soros-funded media outlets, Splash.
Very interesting.

You, my friend, are in total, 100% denial about Glenn Beck. The "Malaysian government" you talk about is actually one Prime Minister - Mahathir Mohamad- who has been internationally condemned for what he said about...you guessed it...the Jews:

"We do not want to say that this is a plot by the Jews, but in reality it is a Jew who triggered the currency plunge, and coincidentally Soros is a Jew. It is also a coincidence that the Malaysians are mostly Muslim...And incidentally we are Muslims, and the Jews are not happy to see the Muslims progress. The Jews robbed the Palestinians of everything, but in Malaysia they could not do so, hence they do this, depress the ringgit."

So, Paine is this something you support? Blaming a Jewish conspiracy for ruining the Malaysian government and robbing the Palestinians? Your buddy Beck does. When the world condemned Mr Mohamad for being an anti-Semite, I guess you and Beck fought the good fight and argued that Jews are engaged in a conspiracy to destroy Malaysia. I guess I am learning something new about you.

Where is the proof he wants to, as you say, "destroy capitalism?" His Open Society fund helped bring down Communist regimes by funding the Velvet Revolution in the Czech Republic, the Orange Revolution in the Ukraine, the Rose Revolution in Georgia. He also helped to engineer coups in Slovakia, Croatia, and Yugoslavia. All communist. Where exactly do you get that he is anti-capitalist from that, Paine? Beck doesn't even dispute his anti-communist activity, he just ignores it.

Bottom line, man, if you think it is acceptable in political discourse to claim that a child victim/survivor of the Holocaust is guilty of "sending Jews to the gas chamber" as Beck did, then I don't think you and I will have much to talk about in the future. It is pure 100% slander, and not acceptable in a civilized debate. Even a non-observant Jew such as myself, finds your tolerance of this slander quite disturbing.

Being a liberal - even a rich one - is not a crime, or anti-American, or evil, or anti-capitalist. It is being a liberal. None of the lies and slander about Mr. Soros that you repeat - verbatim - from Glenn Beck and Ann Coulter are based on anything resembling fact.

Look, man, I have laid out numerous, irrefutable examples of Glenn Beck using known anti-Semites as sources for material he talks about on his shows. He doesn't tell anyone that is where he gets the information, he just spews it out. You have either ignored this or attacked the messenger, but you have never refuted any of it.

Beck is a dangerous person with no boundaries who will attack his political oppoents with anything - even the rantings of notorious anti-Semites. Maybe you are comfortable repeating information that comes from a woman like Elizabeth Dilling, who led pro-Nazi rallies in America in the 1930s, but I am not.

Jewish Funds for Justice, the Anti-Defamation League, The Forward, and nearly every prominent Jewish oprganization is condemning Beck for his newest attacks on Soros. Not because they are bought and paid for, but because they have a sense of decency. They, like me, don't believe it is appropriate to attack a Jewish victim of the Holocaust and say he led Jews to their deaths. That is beyond the pale.

How many more examples of Beck's ties to anti-Semitism do you have to see before you take off your blinders. 5? 6? 10? 100? Is it even possible for you to see behind this man's mask? If Beck is not anti-Semitic, then why does he extend so much effort to advance their lies?

Sorry about the angry tone of my comment. I am just pretty upset about this one. Knowing what kids went through in Nazi occupied countries, I just cannot fathom anyone attacking one of them - no matter what the reason - by saying they led Jews to the gas chambers. That was just too far. Politics does not have to be like that.

Dave, yesterday on Beck's radio program I heard him specifically say that he did NOT blame Soros for his actions as a 14 year old boy and totally understood that he was powerless against the Nazi regime. He said that Soros did what he had to in order to survive that nightmare and did not hold him in blame accordingly.

Frankly, whether Soros is Jewish is completely irrelevant to the main issue at hand in my opinion. He has become incredibly wealthy by collpasing foreign currencies and has had "fun" doing so he has said in his OWN WORDS!

He has inarguably harmed the British Sterling and been convicted of insider trading in France. Further, all of the anti-Semetic balderdash that Malaysia's Prime Minister attributed to Soros for his justification of having done so does not discount the fact that Soros, in the end, is still guilty regardless of his reasonings.

Soros is exceptionally powerful and again, not in Beck's words, but in his own words has said how he wants to bring about a one world governance and this requires the destruction of American capitalism in order to bring this about.

I am sorry, as I am not trying to offend your sensibilities and I absolutely denounce anti-Semitism from whatever corner it emanates.

That said, Soros is not America's friend and like I said, if it were a Rupert Murdoch type with Soro's money doing this manipulation, you would rightfully be horrified and denouncing him for his actions, sir.

Dave, please not the letter to Beck from the ADL:

Sorry to be snippy here, but I don't feel like letting this go.

T., so if Soros is "not America's friend", you imply that he is America's enemy. Don't let me put words in your mouth, but that is what you are implying.

Maybe you should be careful with what you say and with how often you say it, because if a significant number of people believe such a line, the ramifications of such a mentality can bring about untold amounts of grief and suffering. It happened in Europe in the 1930's, and maybe we ought to be able to learn something from history. Even if it isn't anything that happened here... yes, we are Americans, but we are part of the human race. So are the Germans.

Soros has been a naturalized American citizen since 1961. That's almost 50 years now, and more than half of his 80 years. That's 25 years longer than Rupert Murdoch, for what that's worth. And I have been an American citizen all my life.

I used to view hardcore right-wingers as the enemy, but I don't look at them that way any more. That is why I got all the political stuff off my weblog. I want people to get along, and it seems to me I had been doing my part to see that they didn't. Enough of that bullshit. I am as misguided in their minds as they are in mine, but the twain never shall meet as long as people like Beck are out there fanning the flames.

If I am your enemy too, then so be it, I don't have much else to say to you other than that you might not want to believe all that comes out of Glenn Beck's mouth. Beck is not America's enemy, but I believe much of what he is doing and saying does our country a grave disservice.

We all need to think twice before automatically nodding in agreement with our favorite talking heads. After all, their job is not to inform us, it is to steer our thinking. And lately, too many people are allowing themselves to be steered.

No Snave, I hardly consider you, Splash and others on the left as my enemies or enemies of America. Frankly, I think we probably have more in common than what you may even suspect.

The difference lies in that Soros has intentionally done things to harm America's well-being while leveraging his own profits in his course of action. He has manipulated world currencies, been convicted of insider trading, and been accused by more than one government of destroying their monetary system... all the while Soros gets richer.

You might want to consider what his ultimate motives are besides wealth, sir.

I absolutely support and indeed encourage you in your right to free speech, Snave. I sure as hell don't have all the answers. I am imperfect and am hardly infallible. I think opposing ideas and disparate political ideologies are not only healthy, but are vital to our public discourse and the strength of our representative republic.

Now that doesn't mean that we are always going to agree, but a monolithic view on governance absolutely will only ensure its corruption and down-fall, regardless of whether that view is left or right of center.

The difference is that I don't think Soros is doing what he is doing as a counter-vailing view in political discourse. Rather, he is trying to collapse economies (as he has said in his OWN words) in order that he can bring about some utopian globablized governance to the world.

THAT is being an enemy of America and the vital difference you are missing, my friend!