Is Glenn Beck Evil, Stupid, or Both? There Is No Wrong Answer Here 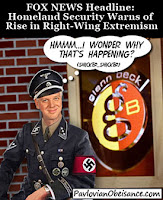 Glenn Beck is not an historian. Not even close (though he plays one on TV, and has even started his own "university"). Michelle Goldberg has a must-read article posted at The Tablet (a Jewish news magazine) on Beck's go-to "historian" David Barton. Barton does not have a degree in History, he studied religion at Oral Roberts University. He has associations with both white supremacists and Holocaust deniers, and is a well known member of the "Christian Identity" movement -- CI is considered vehemently racist and anti-Semitic. This is the man who Glenn Beck said is "the most important man in America right now."
This is, at least, the third time in the last year that Glenn Beck has attempted to pass off the paranoid fantasies of racists and anti-Semites as "history" and when called out on it, Beck has refused to apologize. You would think that a man who held a rally to "restore honor" would at least say he was sorry about promoting (perhaps inadvertently, perhaps not) white supremacy and Antisemitism in his history "lessons." But, who are we kidding? Beck, Barton, and the rest of the folks promoting this nonsense have no honor.
A key tenet of the Beck/Barton school of "history" is its tired insistence that the US is a "Christian nation" and that the Founding Fathers used the Christian Bible as the primary foundation for the Constitution (demonstrably false). It also erroneously teaches that there is no separation of church and state, and that 52 of the 55 Founders were "orthodox, evangelical Christians." This is not true, and is easily verifiable. In 1994, the Anti Defamation League (ADL) wrote the following about David Barton, "This ostensible scholarship functions in fact as an assault on scholarship: in the manner of other recent phony revisionisms, the history it supports is little more than a compendium of anecdotes divorced from their original context, linked harum-scarum and laced with factual errors and distorted innuendo.”
People are allowed to be wrong. Beck and Barton usually are. But these two have been hurling accusations of racism and religious bigotry at their critics without citing a single incident of it. I think they might be projecting their own attitudes onto their critics. From the Tablet piece:

"Barton found an eager audience for his Christian nationalist history on the right-wing fringe. In 1991, as the ADL has reported, he spoke at a summer gathering of Scriptures for America, a group founded by Pete Peters, a pastor in the Christian Identity movement. Christian Identity holds that Anglo-Saxons are the true children of Israel, while Jews are the Satanic offspring of Eve’s liaison with the serpent in the Garden of Eden. Black people, according to Christian Identity theology, are a separate species of 'mud people.' Other speakers at the meeting were Holocaust denier Malcolm Ross and white supremacist Richard Kelly Hoskins. Barton was advertised as 'a new and special speaker' who would ask, 'Was it the plan of our forefathers that America be the melting pot home of various religions and philosophies?' (One can assume that the answer was no.) On November 24 of that year, Barton spoke at another Christianity Identity gathering, this one in Oregon. According to the ADL, his self-published books were advertised in 'The Watchman,' a Christian Identity publication."

Now, before any Beck defenders freak out and cry (Beck is known to do that), keep in mind, that at this point, it is hard to determine if Mr. Beck is really a racist and anti-Semite or that he merely is being influenced and (perhaps) manipulated by them. He sure does like to cite their "work" on his shows. But, seriously, no one can legitimately refer to either Glenn Beck or David Barton as historians. They just aren't.
Posted by Dave Splash

Amazing. Let's falsely demonize those with whom we disagree.

I have personally heard Barton speak in a live audience. Now perhaps he doesn't have a degree in history but his knowledge of American and western civilization history is encyclopedic in its scope.

Further, I have NEVER heard anything from him ever that would support your charges of racism and anti-semitism from him, nor Beck for that matter. On the contrary, I have heard just the opposite from both with strong support of such historically oppressed groups.

Barton is a devout student of history and has collected many original letters and documents from our Founding Fathers, some of which he put up on screen for the audience to see for themselves.

His recitation of our history is absolutely in context, particularly with the undeniable and inarguable fact that America was indeed established on Judeo-Christian values and is a Christian nation, despite what you, Daily Kos, or our current president says to the contrary, sir.

Your posting here is factually inaccurate throughout, Splash. You may disagree with Beck and Barton, but I suggest you do some research prior to spouting such falsehoods, sir.

I stand 100% behind every word. If you have issues with it, take it up with the Anti-Defamation League. They are the ones who have had Barton on their radar since the early 90s.

Barton may be "devout" but that does not apply to his history. Cherry picking quotes here and there does not make a history. Barton and Beck are what I like to call "dust jacket historians." They look at a lot of old books, and like to cite them as though they are on to some secret information that no one else has. Problem is, they didn't actually read the book, and they didn't actually research the author.

Like I said, this is the third time Beck has used the writings of anti-semities and/or racists in his creation of an alternate history where the Founding Fathers were like Jerry Falwell, being a liberal is akin to being Hitler, and minorities are the real racists. This has been his theme for the last two years.

But, see, we know where he is getting his information. And that should make people re-evaluate "Beck the historian." But it won't. Beck does not have listeners or viewers, he has followers. Beck has become religion for the tea party, and no matter how many facts you are confronted with, the tea party has faith in Beck, and doesn't care.

You can be as offended as you want, Paine. Sorry about that. But this is not made up. Barton is well known as a member of the Christian Identity movement, which is indisputably racist and anti-Semitic. And it is not me who is making the further claims about Barton, it is the ADL.

This is now the third time Beck has been caught peddling "history" from known anti-Semites. The third.

If any liberal in existence ever did this even once, he would be drummed right out of the media with the most vicious hate campaign from the right in a matter of days. But like I have said many times before, the rules don't apply to the right. You guys can say whatever baseless crap you want to about President Obama, Speaker Pelosi, or liberals in general, and it's just politics for you. But when one of your own is proven to have ties to extremists, you pretend it isn't real and cling even harder to the bullshit that extremist is peddling.

Your side has brought this on with its scorched earth politics and referring to everyone who disagrees as a Nazi or a communist. So now when someone pushes back - with fact, not fantasy disguised as history - the right is apoplectic about being called out.

As I said at the beginning of this comment, I stand by 100% of the information in this posting.

Like I said, this is the third time Beck has used the writings of anti-semities and/or racists in his creation of an alternate history where the Founding Fathers were like Jerry Falwell, being a liberal is akin to being Hitler, and minorities are the real racists. This has been his theme for the last two years."

You are so factually wrong on this that it borders on insanity. Never have I heard Beck or Barton spout the vile things you and the ADL claim otherwise.

Beck is renowned for his saying to his audience to "not take his word for things but to research subjects on their own."

When he mentions a book on his show, invariably it spikes to one of, if not the best seller on Amazon.com. He was touting Hayek's book, The Road to Serfdom and knocked his own book from the number one spot on the best seller list, and Hayeks book is decades old.

His audience would have long ago dumped him if he were innaccurate, racist, anti-semitic etc as you claim.

The fact is that he is deadly effective in helping to wake the people of our nation so he is targeted with the entire Alinsky arsenal in an attempt to silence or make him irrelevant.

The public though know the truth. Sad that the ADL and the militant progressives do not... nor do they care about their damnable lies.

The ADL said nothing about Beck, they said it about Barton. And, as stated, he has been on their radar since the early 90s. It is Beck who has elevated this man to such status. Beck. It is pretty rough to call the ADL liars. They are one of the preeminent civil rights organizations in the US, and have a stellar history. They are non-political. But NAACP is on Beck's enemies list, so now I guess the ADL will be, too.

Has Mr. Barton ever been affiliated with the Christian Identity movement? Yes, and he has said so. Did he speak at Christian identity conferences along with Holocaust Deniers and anti-Semites? Yes he did. He has never denied that.

Facts are facts. If a Democrat had ties to Holocaust deniers, you guys would be all over him. But the right has been engaging in an ends justifies the means strategy for the last few years (decades actually), and if associating with Holocaust deniers or birthers or the John Birch Society can get a few extra votes, then no biggie, right?

The American right used to have standards.