I Believe They Call This The "Smoking Gun" 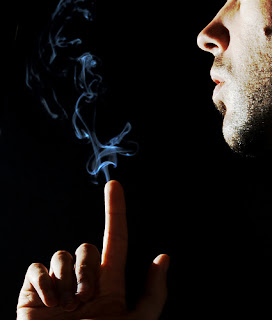 A lot has been made in the last week or so about foreign money being used to influence American elections. Liberals made the charge after the disastrous, Citizens United Supreme Court Case that an (unintended?) consequence of allowing unlimited corporate funding of elections was the possibility that foreign money could get lumped in with American money and be given to a candidate or a party. The lack of disclosure rules would make it very hard to prove this was happening, so the Democrats in Congress sought to create a new law that would expressly outlaw foreign money in elections, and force disclosure of donors. The law was filibustered by the Republicans, and did not pass.
Well, even though the media does not want to cover the story, and are acting as shills for both the Republicans and the US Chamber of Commerce, there is definitive proof that foreign money is being used in pro-Republican/anti-Democrat attacks ads in the current election cycle. It's not a matter of opinion - it's a matter of fact.
ThinkProgress has assembled a list of 87 foreign companies (some of whom are state owned which means a foreign government is responsible for the money) whose money has been used to pay for ads in this year's American election. The foreign money is given to the US Chamber of Commerce's 501(c)(6). This is the same source being used to fund the attack ads. The list from ThinkProgress utilizes information the foreign companies themselves have published publicly. It has been proven, definitively, that nearly $1 million in foreign donations to the Chamber have been utilized. Despite the media's lack of interest (and reflexive defense of the Chamber) and the Republican's claim that foreign money in US elections is a "non-issue," this is a huge deal.
Here are some of the foreign companies currently trying to manipulate the American people: Bahrain Financial Harbour Holding Company, TAIB Bank of Dubai, QuEST Global of Singapore, Larsen & Toubro of Mumbia, India, Credit Suisse of Switzerland, Educomp Solutions Ltd of Delhi, India, J.B.Boda Insurance of Mumbai, India, and the list goes on an on. Keep in mind, this is only what has been disclosed. The Chamber is now refusing to release any information at all about its foreign donations. Rather than clear up the issue and prove they are not using foreign money to influence US elections, the Chamber simply said, "We are not obligated to discuss our internal procedures." Uh-huh.
What I find almost as disturbing as the fact that foreign corporations and governments are illegally influencing our elections is that Republicans are saying it is no big deal. I seem to remember investigation after investigation in the 90s about accusations that the Bill Clinton re-election campaign had secret Chinese donors. Remember the footage of Al Gore at the Buddhist Temple? Of course, none of those allegations panned out, but the media and the GOP sure took it as a serious enough issue to obsess over for months. Why nothing in this case? Liberal media bias? Oh wait...
This is a huge issue, and not one the media should ignore since it doesn't fit the 2010 election narrative they have already written. Every single Republican who has accepted money from the US Chamber of Commerce or had Chamber ads made on their behalf should be questioned - on camera - about their potential acceptance of foreign money in their campaign. Short of that, it will be obvious that the media is too beholden to the Chamber and has a clear preference for Republicans in this election.
Posted by Dave Splash

Next, the foreign money donations the CoC does receive are kept separately and not used for US campaign donations. Even that evil right-wing conspiracy rag called the New York Times debunked this myth in last Saturday's paper.


Oh, and for the record, there were indeed very strong ties and evidence of Clinton malfeasance that was never prosecuted. It is a shame because his violations there were far more egregious than his guilt in perjury, suborning perjury, witness tampering, and hiding subpoaened evidence all due to a stained blue dress.

You see, there are two known large sources of low sulfur clean coal in the world at the time. One of those is in Indonesia under the control of Mr. Riatti. The other is located in Southern Utah. After Mr. Riatti's illegal campaign contribution, Clinton inexplicably declared the Grand Escalante Staircase (where that coal is located) as a national monument. That coal can no longer be exploited there and thus makes Mr. Riatti's reserve that much more valuable.

Well, I see you got your Glenn Beck approved talking points on the Chamber. That didn't take long.

You are confusing the US Chamber of Commerce with the various local and state Chambers. They are not the same. The US Chamber counts among its clients Exxon Mobil, Koch Industries, & all of the biggest Wall Street banks. They don't give a flying f&*k about small business, they do the bidding for the world's largest, and the ones who support outsourcing the most.

The NY Times did not debunk anything. They, like most of the media, are merely transcribing press releases from the Chamber and calling it reporting. ThinkProgress is doing the real reporting. And if the Chamber is so innocent, why will they not allow a simple auditing of their books by the FEC?

The US Chamber of Commerce is now a wing of the Republican Party. That is a fact. They lost hundreds of companies with their radical, global warming denials, and now they are losing others due to their blatant politicization of the formerly reputable organization.

The foreign money (much of it from companies that take American jobs through outsourcing) is put into the very same 501(c)(6) that is spending millions on ads for the Republicans. There is no separation of funds. The Chamber is lying, plain and simple. Once again, a simple audit would clear this right up, but, what's that? They won't allow it? They are acting awfully guilty. The companies listed in the article are only known because they listed it on their websites. The Chamber won't disclose anything. There may be thousands more foreign companies and millions more in illegal money. Not sure why the right doesn't think this is worthy of investigation, but the President getting BP to agree to pay $20 billion is worthy. Sounds like you guys have your priorities backwards.

And seriously, all that Clinton stuff...you guys need to get over the 90s. You threw every single trumped up, made up charge that you could think of against the guy, and none stuck. You had nothing. And now, he is the most popular ex-president alive. It should serve as a lesson for the way Obama will ultimately be viewed, but the right rarely learns the right lessons.

If you're happy with an ends justifies the means mentality for politics, and utilizing foreign money to advance your side's agenda, that's on you. I'm disgusted by it, and the Chamber's attitude since this story broke has made them look increasingly Nixonian in their denials.

Dave, you are the one using a thoroughly subjective and inaccurate source, sir.

See the New York Times article on this:

From that article, "White House officials acknowledged Friday that they had no specific evidence to indicate that the chamber had used money from foreign entities to finance political attack ads.

'The president was not suggesting any illegality,' Bob Bauer, the White House counsel, said."

I cannot argue facts when you don't actually have any, Dave. :)

The Chamber Of Commerce's non-disclosure pretty well implicates them, sort of in the way when a defendant "pleads the Fifth". It's not easy to give them the benefit of the doubt. One thing certain is the C of C is an amoral artificial entity composed of corporate interests. How can that possibly be of any good to the rest of us?