The Future Speaker (?) and the Nazi Enthusiast 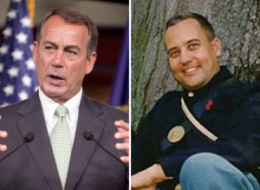 Congratulations, Republicans! Your house leader will campaign for Nazi SS enthusiast Rich Iott after all. Why let things like the fact that Iott dresses in the garb of the henchmen for most evil government of the 20th century, participates in militia activities, and insults WWII veterans and Jews on a daily basis with his "hobbies," get in the way of Republican Party politics. Boehner has given Iott money, and refuses to ask for it back, and he will be appearing with Iott at a rally this Saturday in Ohio. Pathetic.
"Not only has John Boehner recruited, embraced, and financed a disgraced Nazi enthusiast running for Congress, but now Boehner is pouring gasoline on the fire by throwing a campaign rally for him," said DCCC spokesman Ryan Rudominer. "Thumbing his nose at our nation's veterans, women, and people of the Jewish faith, all the while refusing to stand up for basic American values in order to try and win an election, apparently this is what Boehner meant when he said, 'We're not going to be any different than what we've been.'"
Posted by Dave Splash

While I am not a fan of Boehner and find this support of Lott more than a little distasteful, what is really more telling is that the left has NOTHING to run on except character assassination and trumped up nonsense.

(Granted, the GOP gives them fodder for this often enough though.)

At the end of the day though, the Democrats cannot run on the issues or their records because they are wrong on those accounts, so they resort to the only tactic they have left.

Luckily for them they are good at scorched earth politics.

They learned from the masters: The Republican Party. The conservative movement and the GOP invented scorched earth. The Democrats suck at it.

As for Iott, I don't think pointing out the man's admitted "hobby" is character assassination. He defended it, while I think it's indefensible.

And if Nancy Pelosi held a rally for a Dem with a "hobby" like this, there would a call for her removal from office from the right faster than you could say nazi.