Do You Want the Tea Party Counting the Votes in 2012? 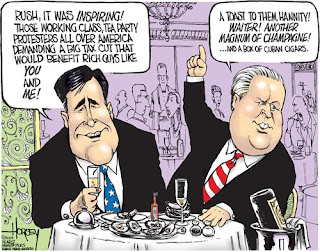 I received the following email yesterday that alerted me to an important issue in the upcoming election that I was not really aware of. Who will be counting the votes in the 2012 election could be decided this year -- by Secretaries of State across the country. It is vitally important to have fair and impartial (and sane) people as Secretary of State so we don't have repeats of 2000 and 2004, where overzealous right-wingers used questionable (and often illegal) tactics to suppress the Democratic vote, or to disenfranchise entire communities. Please read this (and donate if you can):
-------------------------------------------------

Do you want the Tea Party to count the votes in 2012? With less than four weeks left until the election, many Secretary of State races in key battleground states hang in the balance. Whoever is elected now will be in charge of counting the votes for President Obama's re-election.
Not surprisingly, the Tea Party has made Secretary of State elections a key priority. If they win, vote suppression, demands for excessive ID requirements and sheer hysteria would rule the day in 2012. Former Florida Secretary of State Katherine Harris and Ohio Secretary of State Ken Blackwell would fit right in!
You can prevent this debacle in 2012 by acting today to defeat Tea Party endorsed candidates for critical election positions. Here are just three examples:
• In Ohio, Tea Party endorsed Republican Jon Husted is running to take back this seat for conservatives. Husted would be a giant step backwards for this key battleground state.
• In Michigan, Ruth Johnson won the Republican Secretary of State nomination after courting tea party supporters.
• In Iowa, Tea Party member and conservative Republican Matt Schultz is running to repeal Iowa's innovative same day voter registration and other election reform.
Fight back against the Tea Party by donating to the Secretary of State Project now.
You can make a difference in these critical races. Dollar for dollar, the SoS Project is one of the most effective political investments you can make. We run smart, targeted campaigns with proven results in key battleground states. By making a small contribution today, you can make sure the Tea Party is not in charge of counting the votes later.
Posted by Dave Splash

You loose all credibility, Splash, when you mention the Gore election in such context.

Florida's Secretary of State Harris FOLLOWED FLORIDA STATE LAW with the recount precisely. The Democrats insisted on recounting again and again, presumably until they got the outcome they wanted.

The Supreme Court only stepped in and said that the state law must be followed when the Democrats were screaming to violate it so that people wouldn't be "disenfranchised" as their cover story.

In other words they wanted to falsify the recount.

Frankly, in retrospect, if Gore had been elected, his single term in office might very well have allowed the country to come to the realization sooner that the Democrats are no longer sane enough to govern America and we could have begun the restoration of the nation to its rightful constitutional roots.

Not only that but with the corruption on the left with voter registration and falsification, I can understand why they would also want to be in charge of counting the votes. The only way they would be able to hold on to their power is by nefarious means.

Put down the tea and walk away. Slowly. Don't make any sudden movements.

Seriously!? That is how Fox News and Limbaugh have spun one of the darkest periods in American history? First of all, Harris was the state co-chair of the Bush campaign. She should never have been allowed to be both the state office holder who certifies elections, and the lead advocate for one of the campaigns at the same time. If the party's had been reversed in that situation, there would have been much more made of that.

Second of all, it was the FLORIDA SUPREME COURT that decided that the counting should continue. It was Harris and the Bush lawyers that sought to deny the voting rights of thousands of Floridians by stopping the count when Bush was ahead.

The Bush v Gore case was one of the three worst Supreme Court decisions in history. Even the partisan "justices" with the majority said in the opinion that this decision should not be used as precedent in the future. Kind of a giveaway that their decision was pure right wing activism and completely unconstitutional.

A Gore Administration would not have invaded Iraq, would not have given tax cuts to millionaires that squandered the Clinton surplus, and would have finally moved forward on getting this country away from fossil fuels and begin to stop giving all our money away to evil regimes like the Saudis.

Yeah, that would have sucked.

Well at least we agree that a Gore Administration would have sucked! ;)