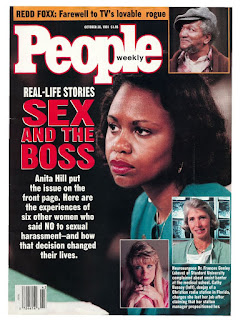 It was recently reported that Virginia Thomas, wife of Supreme Court Justice Clarence Thomas, called  Anita Hill at her office and demanded an apology for her accusations of sexual harassment from back before Thomas was on the court. In her message, Mrs. Thomas said the following, "I just wanted to reach across the airwaves and the years and ask you to consider something. I would love you to consider an apology sometime and some full explanation of why you did what you did with my husband. So give it some thought and certainly pray about this and come to understand why you did what you did. OK, have a good day."
"Why you did what you did with my husband?!" Ummmm......your husband sexually harassed Anita Hill you nimrod! It was what he did to her, which he has still never admitted to, nor apologized for. My god, the arrogance of that woman!! And then for her to describe the somewhat threatening phone call as an "olive branch" is utterly detached from reality.
Okay, Mrs. Thomas, if you want Anita Hill to apologize for being the victim of your husband's obsessions with sex and porn, then the Justice needs to apologize for a few things himself. First, he needs to apologize for his horrible record on the bench, and for his consistent pre-judging of cases before any presentations have been made. He needs to apologize for being little more than a carbon copy of right-wing activist Judge Antonin Scalia, and for refusing to ask any questions during Supreme Court cases (or falling asleep during oral arguments, as he has done many times). He needs to apologize for his unconstitutional vote in Bush v Gore, which gave the presidency to a man who is almost universally considered the worst person to ever occupy the office. Then he should be forced to apologize for his vote on the Citizens United case, which effectively turned over our elections to corporations both foreign and domestic.
Last, Mr. Thomas should apologize to Anita Hill for unleashing his wingnut tea partying wife against her. This is one of the most inappropriate actions ever taken by a spouse of a Supreme Court Justice. Mr. Thomas should be embarrassed. He owes the American people an apology for this incident, and for his consistent activism on the bench.
I believe Anita Hill. I believed her then, and I believe her now.

UPDATE: Mrs. Thomas can't blame anyone for this except herself. She brought this whole issue up again. Now, a former girlfriend of Clarence Thomas has come forward and says she believes Anita Hill because Thomas is exactly type of person Hill described. "The Clarence I know was certainly capable not only of doing the things that Anita Hill said he did, but it would be totally consistent with the way he lived his personal life then." If Clarence Thomas weren't such a jerk, I'd almost feel bad for him. His wife has brought this whole issue back into the media. They have no one to blame but themselves.
Posted by Dave Splash