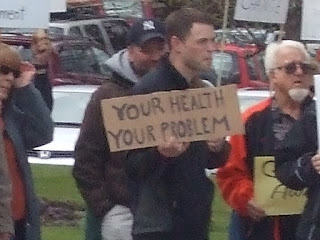 Many portions of the health reform law passed earlier in the year take effect today. Rather than comply, the gangsters who run the nation's largest insurance companies have decided to put profits ahead of the health of children, and are canceling the "child only" polices they have sold for years. From today's Los Angeles Times, "Major health insurance companies in California and other states have decided to stop selling policies for children rather than comply with a new federal healthcare law that bars them from rejecting youngsters with preexisting medical conditions."

So, remember when you righties run around worshiping at the altar of private industry, that the industry you love so much - health insurance - is saying NO to covering children with cancer, bone disease, cerebral palsy, cystic fibrosis, autism, and thousands of other "conditions" that afflict children. I hope you all are proud of your favorite industry. First it was denying coverage for women who were victims of domestic abuse, now it is refusing to sell policies for children. How will a child with cancer get treatment if they can't get insurance? I guess they won't and they'll just die. Sounds suspiciously like those death panels I heard Sarah Palin talking about...

Yeah, let's repeal the law that bans this sort of thing (and requires insurance companies to cover all children - regardless of pre-existing conditions - until the age of 19). Good idea. Good for the kids.
Posted by Dave Splash

THIS is exactly the Obama socialist plan for health care all along, Dave. BY OBAMA's own words, his plan was this incrementalism of the destruction of private insurance.

If private health care companies are legislated to the point where they cannot make a profit, they will eventually go bankrupt.

The only one left in the end is the single payer federal government. Hmmm.... and so this decline in private insurance begins.

I told you so!

"if private health care companies are legislated to the point where they cannot make a profit..."

But if making their profits requires that children with leukemia get kicked to the curb, then tough shit for them.

If you want to choose profits over children's lives, that's your constitutionally protected opinion. I don't share it.

Insurance companies are evil and unnecessary. They stand in between doctors and patients and they decide - based solely on profit - who gets care. The new law allows them to make their blood money, but doesn't allow them to cancel sick people, not cover people who have been sick in the past, or stop coverage after some artificial cap.

This is a major improvement. Repealing the law is a death sentence for sick children. Repeal away.

Your hysterics aside, this simply isn't true. Further, if insurance is evil and unnecessary, why not just federalize all of the companies now? (I am sure Obama would love that!)

I agree that the insurance companies need to be held accountable for their obligations and that they should not be the ones dictating what treatments are provided for a patient, but nor should they be FORCED by law to provide money for someone's care AFTER THE FACT!

That is akin to calling Geico or Allstate the day after totalling your car and then purchasing insurance so that you can submit the claim. When this is done by force of law it is little less than facsism.

Obama care does not fix ANY of the damned health care problems. It needs to be repealed and real reform legislation introduced so that free market principles can reduce prices and improve services for consumers.

Of course, there must be legal stipulations put into place to ensure that insurers are indeed living up to their contractual obligations.

Obama care is a farce though and not the way to fix the problem. It increases costs, decreases competition, and rations care.

Paine, people are not cars. They are not houses. They are not property. Comparing people with cancer to a totaled car is a sick analogy. I guess I just have a higher regard for humanity.

Furthermore, it is not "after the fact". Insurance companies have dropped tens of thousands from the rolls after they got sick. They weren't sick before they signed up and paid all of their premiums.

And what does the private insurance industry that you worship so much propose to do with people who were once sick but are now better? They still can't get insurance without the new law! A person who, for example, had cancer as a teenager could be denied health insurance for the rest of their life under the pre-existing condition exclusion. Are those people supposed to be denied health care for the rest of their life? Where's the free market solution for that?

I didn't hear a free market solution for dealing with kids with cancer or autism or cystic fibrosis coming from your repeal argument.

Sorry, but your side has shown once again that you value the profits of insurance companies more than you value people's lives.

That's not hysterics. That's your side's philosophy without the angry spin.

Dave, as to your point of insurance companies dropping people after they get sick, that is what I was referring to when I said that those companies need to be held to their obligations. I absolutely agree with you on this.

As for folks with cancer or other chronic diseases, I would recommend a free market solution of pooling these higher-risk insurees together for more afordable rates. Granted these would not be as good as the rate for someone in great health, but it would provide an opportunity for more affordable care.

By the way, profit is not a bad word, Dave. It is what has created the most powerful economic force in the world and the greatest inovation accordingly. If you take away the incentive of profit, you destroy job creation, research and development, and economic growth. Ask any the USSR!

I agree that profit is not a bad word. But when it comes to people's health, welfare, and life, I think profits have to come second to that. I will never place the profits of a corporation over the health of the American people. Going to see a doctor when you're sick should not be a privilege that only some have.