My New Morning Routine + Some Free Advice for MSNBC 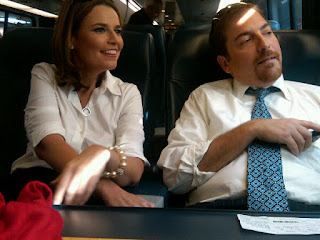 My morning routine has been altered in recent weeks as I now find MSNBC's Morning Joe to be completely insufferable. Joe & Mika are two of the most smug and opinionated people on TV today. Despite getting decent guests once in a while, having to listen to Joe Scarborough's "I used to be a member of Congress so I know better than you" attitude is often too much to take. My love/hate relationship with Ms. Brzezinski is well documented on this site. Sooooo......

Since I block Fox News on my TV, and CNN is about as interesting as watching paint dry, I leave the TV off until Morning Joe is over and The Daily Rundown begins. It is a much better show with far superior hosts.

Let's start with Chuck Todd. He is obviously well versed in politics, and has an encyclopedia-like knowledge of nearly every district and race in America going back decades. It's quite impressive, actually. Todd offers straight political analysis, and I honestly have no idea what his personal politics are. One might assume that since he works for MSNBC that he is a liberal, but I don't think it's nearly that cut and dry. He also seems to have a healthy interest in sports, which is cool; but his musical comments show that is not, necessarily, his strongest area. 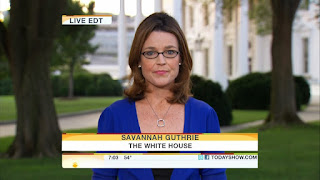 Then we have Savannah Guthrie. Whoah. Another smart and sexy newswoman at MSNBC! According to her bio, Savannah is both a lawyer and reporter and spent time at Court TV before joining MSNBC. She graduated from University of Arizona the same year I would have graduated from there if I hadn't transferred after my Freshman year. Too bad, because I was once considering a major in journalism, and if I had, maybe we would have met back then. But I digress...

Leaving the realm of the "what if" and staying in reality, I can't really tell Ms. Guthrie's political leanings either. Her legal background gives her an advantage when interviewing clueless politicians who have only a rudimentary knowledge of the laws they seek to create or repeal. I like that. She seems like a solid, no-nonsense reporter.

Saying she is a babe is insulting, I guess. But she is. Sorry. I dig the whole smart and beautiful thing, and having a strong amount of political knowledge only makes her hotter (and the glasses work big time).

Chuck and Savannah seem to have a good repoire and a decent sense of humor, so the show can be light at times (I like the White House soup of the day stuff). That's good since we live in such heavy times in general. My only complaint is that I have to miss the last 10-15 minutes of the show every day so I can get to work. Why doesn't MSNBC cancel Willie Geist's show, move Morning Joe an hour earlier, and then put The Daily Rundown on an hour earlier. Hell, add Willie Geist to TDR! He's funny. MSNBC can have that advice for free.
Posted by Dave Splash

If one truly cannot tell a reporter's political persuasion, PARTICULARLY on PMS-NBC, then that is indeed impressive and my hat is off to them!

Actually real reporters keep their politics to themselves. You might not be aware of that since you watch the Republican National Channel.

Dave, on the contrary, I understand the difference between opinion commentary from the likes of a Hannity or Olbermann versus an unbiased journalist such as a Chris Wallace type.

A reporter should report the facts and not interject his own slant on things. That is the difference between a reporter/journalist and an editorialist. At least such was the case, once upon a time....

"...unbiased journalist such as a Chris Wallace type"