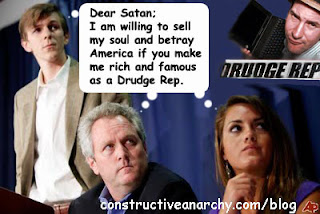 The latest scam perpetrated by right-wing "journalists" James O'Keefe and Andrew Breitbart has backfired again. You may remember the pair's first scam -- the heavily edited and doctored videos that were purported to show ACORN employees engaging in child trafficking and other illegal activities though, in reality, showed nothing of the sort - made national news and even prompted Congress to try and de-fund the agency.
The next scam was an attempt to tap into the phone lines of Sen. Mary Landrieu (D-LA) in an attempt to embarrass her somehow. O'Keefe and his band of right-wing assholes were caught. However, since one of the aforementioned assholes' fathers is the US Attorney for the state of Louisiana, the boys got off with a slap on the wrist. Nice to see equality under the law in the state of Louisiana. O'Keefe, his boss Andrew Breitbart, and the rest of these scumbags were celebrated on Fox "News".
Then Breitbart (without O'Keefe this time) intentionally edited a video of an African-American employee of the Agriculture Department to paint the woman as a racist. The un-edited video showed that the woman is the exact opposite of a racist, and (finally) revealed Breitbart to be a propagandist and a liar. His credibility was damaged everywhere except for Fox, where his dishonesty was celebrated and rewarded.
This time, O'Keefe, Bretibart and crew wanted to "embarrass" a female reporter from CNN by putting her in a sexually suggestive situation. CNN's Abbie Bourdreau wanted to interview O'Keefe for a story she was working on about the "young conservative movement." O'Keefe and his buddies believed that Bourdreau could only be interested in them for sexual reasons, and claimed she was planning to seduce O'Keefe in an attempt to get him to cooperate with the interview and make him look bad. They referred to her as "this bubble-headed-bleach-blonde." Clearly, these folk are sexist, misogynist, and delusional.
The "plan" was to have Bourdreau meet O'Keefe on a secluded boat for the interview. O'Keefe claimed the meeting would be at his "office." The boat/office would be adorned with numerous sexually-oriented things including a bowl full of condoms, sexual lubricants, and porn, among other things. O'Keefe planned to secretly record Bourdreau while he "seduced" her on his love boat. According to documents obtained by CNN, O'Keefe even filmed an introduction to his hit job where he discussed his made-up claim that the CNN reporter was planning to seduce him: "My name is James, I work in video activism and journalism. I've been approached by CNN for an interview where I know what their angle is: they want to portray me and my friends as crazies, as non-journalists, as unprofessional and likely as homophobes, racists or bigots of some sort…Instead, I've decided to have a little fun. Instead of giving her a serious interview, I'm going to punk CNN. Abbie has been trying to seduce me to use me, in order to spin a lie about me. So, I'm going to seduce her, on camera, to use her for a video. This bubble-headed-bleach-blonde who comes on at five will get a taste of her own medicine, she'll get seduced on camera and you'll get to see the awkwardness and the aftermath. Please sit back and enjoy the show."
In case they got caught, O'Keefe planned to attack CNN the following way, "[I]f they go on the attack, you should point out the hypocrisy in CNN using the inherent sexuality of these women to sell viewers and for ratings, passing up more esteemed and respectable journalists who aren't bubble-headed bleach blondes and keep the focus on CNN." Sickening. So, now it's the fault of all female journalists that James O'Keefe can't keep it in his pants while being talked to by a woman?! How do you accuse a network of sexism while referring to a female reporter as a "bubble-headed bleach blonde"?
The whole scenario sounds like a dangerous set-up and one that could lead to possible date rape or some other form of sexual assault. O'Keefe has no respect for women or the truth, it would seem.
Fortunately, the reporter did not go onto the boat as she was tipped off about the scam just before she got there. She was then shown a 13 page document entitled "CNN Caper" where the scammers detailed their plans.
Attention right-wingers: this is not, in any way, journalism. This was a misogynist attack on women reporters. Why exactly do conservative "journalists" have such issues with blacks and women? Sounds like a scary pathology that is running throughout the conservative "movement." Personally, I think it is disgusting. I wonder how long before the tactics of Breitbart, O'Keefe, and the rest of their gang get someone killed or seriously hurt. It's heading toward that now. Why does an organization like Fox, who claims they are a legitimate news organization, continue to peddle this crap? One can only wonder.
This is indefensible. And anyone who tries to defend the tactics of Breitbart and O'Keefe are just as much of a filthy, lying scumbag as they are. I am adopting a zero tolerance policy for defense of this kind of hate politics masked as "activism" or "journalism".

Ms. Bourdreau is a whole lot nicer towards her potential attackers than I would ever be in this video:
Posted by Dave Splash