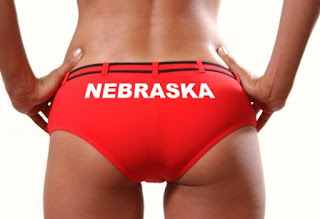 That's right, friends, football season is finally upon us! College starts this weekend, and NFL begins on Thursday. This could be a great year for Nebraska after nearly a decade lost in the seas of mediocrity. This is coach Bo Pellini's third year, so everything should finally be in place after the lost years of Coach Callahan. The Huskers have to have a great year since it is their last in the Big 12, and we need to impress the far tougher Big Ten teams for next year.

The first game is against Western Kentucky. This should be a pretty easy one for the Huskers, as they were 0-12 last season. Tough break for them, I guess, to have their season opener against a Top 10 nationally ranked team, but I didn't make the schedule. I'm just glad football season is back!
Posted by Dave Splash

My mother-in-law will be insufferable if the Huskers do well this year. Needless to say she is a big fan... and she lives in Washington state for cyring out loud! She even puts a dang Husker bandana on her German Shepherd.

Oh well, I guess I should just be thankful she isn't a USC fan!

I think your Mother in law will be okay this year. Unless NU just collapses in some epic display of lameness, we should remain in the Top 10 for the entire season and get a great bowl game.