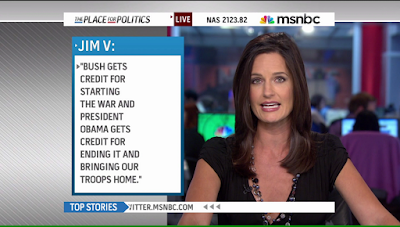 Hate to break it to you, but every single one of the stated goals of the "surge" was not met. The troops did their part, but there is no unity government, there is no revenue sharing agreement, the Kurds are still angry and want separation. It was supposed to "create space" so the various parties could work out their differences. The differences are not worked out, and the current Prime Minister actually lost the election and yet is still in power. But, it is better than it was in 2003. If you want to call that a success, I guess it is. Someone had to pull the plug on this disaster so we could leave and start working on re-building America instead of flushing away billions on Iraq (who may end up part of greater Iran at some point in the future).

Furthermore, if it weren't for the Democrats winning the 2006 midterms, Rumsfeld would not have been fired and the "surge" would never have been implemented. Also, the notion of a time line never came into being until the Democrats took over. And it was this time line that forced the Iraqis to start taking their training and governing more seriously than they had before.

If McCain had won in the election of 08, this day would never have come. He would have kept the war going on indefinitely (as the Bushies wanted) and would have conveniently ignored the Status of Forces Agreement time line that Bush ultimately (under tremendous Democratic pressure) signed.

Biden and Obama's 2006-07 position on the surge is irrelevant. They inherited a war and had to deal with what they were dealt.

But if you want me to admit they were wrong about the surge, then you must admit Bush was wrong to start the war in the first place. Deal?

I thought the surge also had a primary objective of quelling the rising violence. There were too few troops on the ground so that when the troops would clear a town of terrorists (i.e. Falluja) and then leave, the terrorists would return, fortify their positions and kill any civilians that provided aid or intel to our coalition.

Petraeus knew that by having the surge, he could clear areas and then have the necessary forces stay in those areas to keep them from falling back under terrorist control.

The surge worked in that it destroyed most of the terrorist network and gave the opportunity for the Iraqi people/government to work towards those other goals you mentioned.

Without the surge, civil war would still be rampant, or perhaps Iraq would have fallen to another terroristic regime by now.

It certainly would have been the case if we had not done as we did. It is highly likely that Iran would have taken over Iraq either directly or by proxy via a Moktada al Sadr type.

Biden and Obama were fools on this issue, and my fear is that this is not the last we have heard trouble-wise from Iraq with this artificial time line.

There was a reduction in violence, that is true. But a lot of that had to do with the so-called "Sunni awakening" and the deals made between various insurgents and Iraqi leadership and the military.

We needed more troops from the get-go, and the surge did that. But many of the same issues still exist in Iraq that did before the surge. That civil war may start back up as the issues were never really settled, the country needs an oil revenue sharing agreement, and still does not have one. Iran is still very influential in Iraq and that influence has grown, not shrunk.

If the US presence reduced violence, yet none of the political progress has been achieved in more than three years, then we really did need to just cut our losses and move on. Saddam is dead. Adios, amigos. This would have never come to fruition if we had followed the Cheney/McCain perpetual war model that was advocated all throughout the 2008 campaign.

Here is a quote from Defense Secretary Robert Gates (you know the guy in charge during the lauded "surge") yesterday, "The problem with this war for, I think, many Americans is that the premise on which we justified going to war proved not to be valid, that is Saddam having weapons of mass destruction.”

Yep. It's why the surge never mattered to most people. The war was a mistake. Plain and simple.

I agree with Dave about Iraq being a mistake, at least in a strategic sense if not in other ways too.

I just wish that if we had to go get into a war, Bush and Cheney would have concentrated on Afghanistan from the get-go. I know we aren't supposed to go around assassinating other countries' leaders, but if Iraq had really been all about getting rid of Saddam, maybe a special-ops thing could have taken care of that... leading me to believe Iraq was all about the oil.

So why invade Iraq, possibly on false pretenses and for it's oil, when the people who attacked our country are the ones who needed (and still need!) to be taken out?

Our troops perform marvelously, wherever they are and whatever they are asked to do. They work hard to keep us safe, and they follow their orders. I just wish our "leaders" had had the sense to commit full military resources to Afghanistan back in 2001. As it has worked out, it seems we have had to wait 8 or 9 years since 9/11/01 (and for different people to be in office) for that to happen.

Now that we are in Afghanistan and committing more resources there, I wonder about how "winnable" that one is... we are over there trying to drum out and defeat religious fanatics who may well view any form of democratic government as sacrilege... I see no real opportunity for "nation building" in Afghanistan.

How long do we spend our treasure in Afghanistan before we realize we can't get rid of all the Taliban? What would a "victory" in Afghanistan look like? And how much longer can we keep a war going over there before it contributes to our financial downfall... wasn't that a big part of what brought down the USSR, spending too much on Afghanistan?

Anyway, for what it's worth, while I never really understood why Bush and Cheney invaded Iraq, I hope Americans treat any returning troops with the utmost respect. Many have been through hellish conditions over there, the likes of which most of us who haven't been there can't begin to imagine. And many will have problems with PTSD and will have other issues... so taking care of things here at home, in my opinion, has to include getting these people the care they need once they are back here with us. So, more money for VA hospitals. I know, I'm a lefty, but I am all for that one, all the time.

As for the premise of the WMDs in Iraq, it's amazing how many people still believe there were such things, along with believing Obama is a Muslim, Obama is foreign-born, etc. Wonder how that stuff gets started and how it is perpetuated? 8-)

Snave, you are a good man, sir!
I applaud your sensibilities even if we are not always in agreement.

My only question for you is that do you really think Iraq was about oil? It doesn't seem to me that any oil resources we have garnered or would have even hoped to have acquired would have been worthy of the war effort in Iraq.

To my knowledge we are not profiting very much at all from any oil produced in Iraq to this day.

If that really was the hidden "agenda" for Bush and Cheney, then they were indeed fools of the highest caliber. I honestly don't buy that as the reason though. I think they were sincere in their originally stated justifications, even if they were proven to be mistaken in not finding WMD's there.

Actually, I think it was initially about oil. And if the war had gone as Rumsfeld planned: we invade, take out Saddam, sprinkle freedom dust everywhere, and the "democratic" Iraq led by Ahmed Chalabi, turns over the keys to the oil wells, we would have set up the country of Exxonistan.

But things did not go that easily, and after people began to realize that all of the reasons we were told we had to go to war were false, the shifting rationalizations for the war began.

But remember, Paul Wolfowitz told Congress that Iraqi oil revenue would pay for the war.