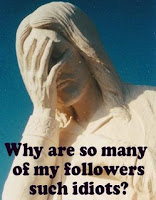 A new survey from the Pew Forum on Religion and Public Life shows that despite the high level of religiosity in American life, Americans know very little about religion. Agnostics and Atheists answered the most questions correctly, followed by Jews and Mormons, and then came Protestants and Catholics bringing up the rear.

"Respondents to the survey were asked 32 questions with a range of difficulty, including whether they could name the Islamic holy book and the first book of the Bible, or say what century the Mormon religion was founded. On average, participants in the survey answered correctly overall for half of the survey questions.


Not surprisingly, those who said they attended worship at least once a week and considered religion important in their lives often performed better on the overall survey. However, level of education was the best predictor of religious knowledge. The top-performing groups on the survey still came out ahead even when controlling for how much schooling they had completed."

I'd love to say I find these results surprising, but I don't. It's been my experience that those who try and shove their religion onto others generally have the least amount of knowledge about said religion. This applies to every religion, in my opinion (though I admit I don't currently know any Buddhists). Perhaps this should be taken into account when folks like Glenn Beck and Sarah Palin publicly doubt the religious faith of people they don't like. I bet they would be among the folks getting the most questions incorrect. That is sort of their pattern.
The same quiz used for the survey can be taken online. Let me know how you score.
Posted by Dave Splash

I didn't take the quiz; I probably wouldn't do very well. I was brought up as a Protestant, but I daydreamed all through the church services, wishing the time wouldn't pass so slooowly.

It makes perfect sense that the most gung ho fire-and-brimstoners (whether Christian, Muslim or any other religion) are ignorant.

I think I'd do okay if I took the quiz. I took a comparative religion course in college, and I have been interested in religion from a sociological perspective for a while. Personally, I have no use for it, though.

I got 14 out of 15 right. (Missed the one regarding the Great Awakening) The rest of the questions were pretty rudimentary to the basics of the world's great religions.

That being said, I acknowledge that while many of my Catholic brother and sisters may indeed have good intentions, their biblical knowledge is often lacking.

Typically, I don't find most observant Protestants to be ignorant of their faith. The same definitely holds true for the Mormons and the Muslims I have had the pleasure of calling my friends.

I bet Glenn Beck (Mormon) and Sarah Palin would both fare quite well on that ridiculously simple test, by the way. Further, I have seen them both be very Christian in the best sense of the word with folks with whom they disagree regarding matters of faith, by and large.

"I have seen them both [Beck and Palin] be very Christian in the best sense of the word with folks with whom they disagree regarding matters of faith, by and large."

Except when it comes to Pres. Obama and Martin Luther King. In those cases, they have to tear them down and question their faith. I don't think it is very Christian to constantly claim the president is a lair when it comes to his beliefs, nor to try and claim you are the new MLK while disavowing nearly everything the man actually believed.

Wow. Where did you get that Beck tore down MLK? He celebrated the man and his vision on civil rights. Doctor King's neice even attended the restoring honor rally last month and said her uncle would have definitely approved.

Check out both sides of the story, Dave.

You can't celebrate a man while you constantly put down everything he stood for and claim his beliefs are un-American (which Beck has done for years).