Who Isn't a Radical These Days? 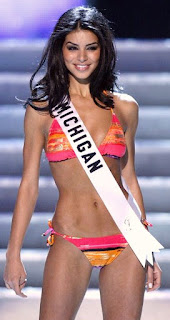 Radical Muslim or an average American? I guess it depends on how close an election is (and who is President).
Does it seem to you that anytime an American Muslim becomes famous or successful, they are immediately attacked by the right wing in this country? I started thinking about this when the right started to attack Feisal Abdul Rauf, the founder of the Park 51 Muslim cultural center in New York. They called him "radical" and claimed he has "ties" to terrorists. This, of course, came after Rauf worked for both the Bush and Obama Administrations as a sort of "good will ambassador" to the Muslim world, and even after it was revealed he was an FBI informant for nearly a decade helping the agency in counter-terrorism. Let's face it, the right will make up just about anything to try and smear people to advance its political agenda.

The same tactic was used when Miss Michigan, Rima Fakih, won the Miss USA pageant. Right wing blogs called her an agent for Hezbollah and a terrorist. A so-called terrorism expert named Daniel Pipes went as far as alleging a conspiracy citing "this surprising frequency of Muslims winning beauty pageants." Really? Frequency? Wasn't she the first?

And how does parading around in a bikini advance the cause of terrorism when true radical Muslims force women to wear the hijab (aka the beekeeper suit)? Sounds, to me, like Fakih is perfectly assimilated just like the right claims they want their Muslims to be.

So, if a Muslim-American informing on radicals to the FBI and a bikini wearing babe in a beauty contest are considered pro-terrorism and a danger to America, what exactly is an acceptable Muslim to these people? One who leaves the country or converts to Christianity, I guess.

Is the right's calling American Muslims "radical" the equivalent of the little boy who cried wolf? Is making all of these phony charges against assimilated Muslims going to damage the ability for us to spot real terrorists? I doubt the people trying to score points against the Obama Administration - at the expense of all Muslim-Americans - really care.

Hmmmm...I wonder if the fact that nearly 1/3 of self-identified Republicans say President Obama is a Muslim - despite the fact that he is not - has anything to do with it? Is attacking Muslims just another way for the American right to keep up its assault on the president?
Posted by Dave Splash

Splash, you make some excellent points, once one gets past the partisan silliness.

Just because he doesn't publicly flaunt his faith and shove it down everyone's throat (like the last guy in the WH), doesn't mean he doesn't have any. He is exercising his faith the appropriate way, in private. The way things used to be done until religious zealots took over the conservative movement back in the late 80s/early 90s. Now we get a freakin' dissertation about religion from everyone running for office.

Actually, Obama did proclaim to be a Christian; however, his actions and some of his chilling statements have no place whatsoever in Christian orthodoxy.

He and his evil anti-Christian black liberation theology are the very antithesis of what is in scripture and what Christ taught.

That's so nutso I'm just going to let it go.