Religion: The New (and Old) Wedge Issue in American Politics 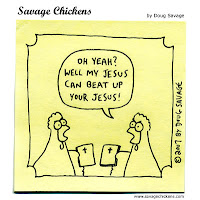 Personally, I loathe how much religion is shoved down the average American's throat inside the current political arena. Everyone should be free to practice whatever crazy things they want to in the privacy of their home and their church/synagogue/mosque/whatever. But the way things are going now, nearly everyone running for office has to publicly display their religiosity and be subjected to criticism if the way they practice their "faith" does not meet the standards of the most fundamentalist of said faith.

A current right wing attack on President Obama is to continually question whether or not he is really a Christian (or secretly a terrorist Muslim). Honestly, I don't care what he is. It's not my business. I appreciate the way he keeps his faith largely to himself and uses his position as president to honor the traditions and holidays of (most) all the religions practiced in the United States, and he even acknowledged non-believers in his Inaugural Address (which according to surveys make up 15% of the population which is higher than the number of any religion other than Christianity).
I found this short article from the Religious News Service a nice primer for those who continue to call President Obama's faith into question:
Obama's Religion: Christianity 101 For The Willfully Ignorant
by Dick Staub, Religious News Service

The flap about President Obama's religious affiliation reveals our national ignorance about religion in general and Christianity in particular. Here are some facts we ought to understand about Christianity before we go around rating the Christian character of Obama or anyone else:

1. Much is being made of Obama's childhood years in Indonesia, the world's most populous Muslim nation. Obama attended a Catholic School and later a public school that he has described as "Muslim" where the Quran was part of the curriculum.

Praying to saints in Catholic school didn't make Obama Catholic; praying with friends inside a mosque didn't make him a Muslim, either.

I visited Indonesia in 1968, right after the assassination of Sen. Robert Kennedy and the Rev. Martin Luther King Jr. During a talk to high school students about life in America, one student asked me, "If America is a Christian nation, why are you killing your leaders?"

It is indisputable that Obama staked his claim as a follower of Jesus. In his book, "The Audacity of Hope," he said of his decision to follow Jesus: "What was intellectual and what was emotional joined, and the belief in the redemptive power of Jesus Christ, that he died for our sins, that through him we could achieve eternal life -- but also that, through good works we could find order and meaning here on Earth and transcend our limits and our flaws and our foibles -- I found that powerful."

This Easter, he said of the Resurrection, "We are awed by the grace Jesus showed even to those who would have killed him ... We are thankful for the sacrifice he gave for the sins of humanity. And we glory in the promise of redemption in the resurrection."

3. You are not a Christian because you pray every day. One of the more comical defenses of the president was from White House spokesman Bill Burton, who declared, "The president is obviously a Christian. He prays every day." Devout Muslims, of course, pray five times daily and most religions have some form of daily prayer. Daily prayer does not a Christian make.

5. Within all religions there is a lot of diversity. Many Orthodox Jews do not consider Reform Jews truly Jewish. Some Catholics believe Protestants are not Christians, and some Protestants believe Mormons are not Christians. The moderate Muslim does not consider the radical terrorist fringe to be truly Muslim. Focus on the Family founder James Dobson has accused Obama of "deliberately distorting the traditional understanding of the Bible to fit his own world view, his own confused theology." When some say Obama is not a Christian, what they're really saying is that he's not their kind of Christian.

6. Jesus himself was not a Christian. Perhaps the most overlooked fact by religious illiterates is that Jesus was a Jew, and he never referred to his followers as "Christians."

Jesus referred to his followers as disciples. Only decades later in Antioch was the term "Christian" used of Jesus followers, and it was a derisive term coined by detractors.

So will someone remind me again why we're getting so worked up about whether or not Obama is a Christian, when Jesus himself wasn't?
Posted by Dave Splash

Dave, that was a very interesting and well done posting, sir.

That being said, I don't particularly care one way or the other what religion Obama is or is not.

The fact that he claims to be a Christian however, and then speaks of a "collective salvation" is the very antithesis of Christ's message. For me it was a matter of a theological point.

If Obama was a person of good character, wisdom, works, and leadership, I would not care if he were a Muslim, Jew, Hindu, or atheist.

I do take exception though when he claims the mantle of Christian and then professes a theological point that is absolutely heretical to all true Christian denominations.

I don't like religious debates because I think they do more harm than good. Not coincidentally, I feel that way about organized religion, in general. I also do not care what a person's religion is, as long as they don't try and push it on me. I respect the fact that the President largely keeps it to himself.

But how can you say President Obama doesn't have "good character"? Even his political enemies concede that he is a good person and a good husband and father. There have been zero personal scandals involving him in his entire life.

He's all the other things too (honest, etc) but the effort of explaining it would be lost on a rabid Obama hater such as yourself. :)

My statement was a hypothetical, "If Obama was a person of good character, wisdom, works, and leadership, I would not care if he were a Muslim, Jew, Hindu, or atheist."


That being said, I don't think someone that attends a racist and anti-Semetic church for twenty years, let alone the connections with domestic terrorists Dorn and Ayers speaks very highly of his character.

For the record, I do not hate Obama either. I do, however, hate what he has done and is doing to our country, Dave.

No issues at all with Sarah Palin raising money for an anti-semitic cult called Jews For Jesus in her own church? I see.