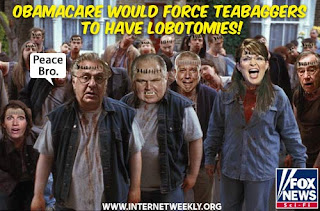 Ahhh, Conservapedia! What a load of hooey. I guess anything that is based on the word "relative" has to equate with "relativism". Andy, you need to look at it just a bit more closely! LOL

If I was a wealthy donor, why would I want to donate to the "tea party"? Why would anyone?

Too bad about Rwanda, and also about Ted Stevens. I never liked Stevens at all, but I believe nobody should have to go like that when it's their time.

Chuck Klosterman has an interesting take on Weezer in his book "Eating the Dinosaur" (a GREAT read), and I liked what he said enough that I might have to re-examine some of Weezer's stuff. If you like the new song, I will take that as a positive and I will give it a listen!

That's just what the right needs... some idiot that denies a scientific theory for spurious reasons.

All that does is give liberals justified ammunition to use against us. (And of course, it makes them think that they are the only smart ones.) (Of course that can easily be countered by offering Dennis Kucinich and Obama as examples.) :)

You had me up until you implied the president is not intelligent. Considering your side worships at the alter of a blithering idiot from the tundra, I'm not sure you guys have room to be questioning anyone's intelligence.

RE: Weezer. Start with their 2nd album, Pinkerton. That is, hands down, their best work.

Thanks for the tip, Dave! I will have to check that one out!

Actually, I want to apologize for the Obama comment. He is indeed very intelligent. He is crooked and decidedly devious and lazy, but he is not dumb.

His arrogance does blind him to certain realities though.

Well, admitting he is not dumb is a nice first step. Now, how about let's admit that 1) Obama is not like Hitler 2) Health Care reform will not kill grandma 3) Obama is not a socialist, communist, or Maoist 4)Obama does not seek the destruction of America 5) Obama was born in the US and is not a Muslim. That would be a nice second step.

Lazy? He has accomplished more in his first 1 1/2 years than nearly any president in history.

1.) Obama is not like Hitler except with some of his socialist policies. Instead of blaming Jews though, he blames the GOP and Bush.
2.) Healthcare reform will not kill grandma. The rationing of it, that will inevitably happen, most certainly will kill her though.
3.)Nope. Can't agree with you on this one. Unless you have changed the definitions of socialist, communist, and Maoist, the terms very much fit Obama. Facts are stubborn things, my friend.
4.) I think Obama is doing what he is because he thinks it will be best for the world, and therefore America too. He is dead wrong and destroying the country, but that is not his intention, I believe.
5.) Obama was born in America and is not a Muslim. I would also suggest that neither is he a true Christian.
6.) Yes, lazy. He tells what he wants done and then lets Pelosi and Reid do all of the heavy lifting with health care, stimulus packages, cap & trade, financial reform etc. He is not intimately involved in the process. He is a cheerleader. He is too damned busy golfing most of the time.

Lastly, we as a nation are on the verge of utter economic collapse on the scale of the Weimar Republic thanks to Obama. Yeah, hell of an accomplishment in only his first 1 1/2 years in office!

It is far from "fact" that the president is a communist, so I'm not sure what planet you live on, my friend. Yes, facts are stubborn things, but Glenn Beck is not a source for actual facts.

And isn't it the job of the legislative branch to write the laws? How is it a bad thing if they do that?

And by your logic, then are Ronald Reagan and George W Bush like Hitler? They both blamed Democrats for all the nation's ills. I think we've made news here...T Paine says Reagan is like Hitler. Interesting.