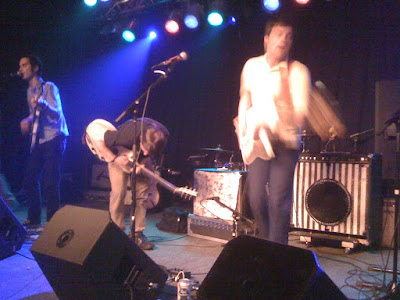 Delaware's finest, The Spinto Band, at Waiting Room 8/5/10
Made it out to The Waiting Room last night for a great indie pop show featuring The Spinto Band and Miniature Tigers. I missed the set from opener The Delta Mirror, but I heard they were really good, and were comparable to Interpol, among others. The Spinto Band was up next, and these guys were excellent. The band's sound is sort of like a mix between Vampire Weekend and The Shins with a little early period Beach Boys thrown in for good measure. Going into the show, I had only heard the Spinto Band's 2008 CD, Moonwink, which is great. I picked up a copy of an earlier disc called Nice and Nicely Done, which is supposedly better than the one I already have. We shall see.

The Spinto Band put on a feisty, energetic show; and despite the sparseness of the crowd, they did their damnedest to engage the audience and get them (us) involved in the show. Being the jaded older guy that I am, I stayed at the bar. When the brief set was over, I found myself wanting some more. That is a rarity these days, where I keep wondering when bands' sets will be over! The Spinto boys would ultimately return to the stage before the night was over. 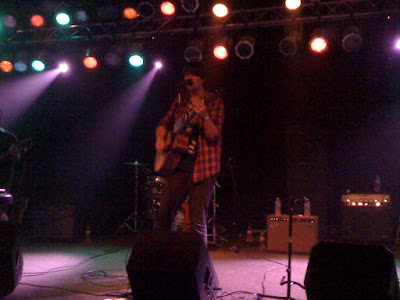 I really enjoyed the Miniature Tigers first EP, Black Magic, and its first full length, Tell It To the Volcano, and I played both on my show. I'm still getting to the new one, FORTRESS. That being said, in a live setting, I didn't like the band as much. The songs seemed unusually slow, and the performances seemed lifeless and dull. Gradually, the band got better; and by the end of the set, they were really great. Still, it should not have taken 20 minutes to get up to speed, so to speak. 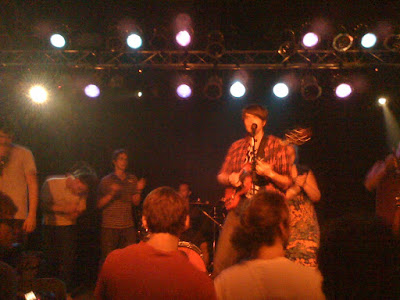 I left the show as a bigger fan of The Spinto Band than I had been before. As for the Tigers, I would definitely not rule out seeing them in the future even though I had some issues with the early part of their set.
Posted by Dave Splash