Maybe Not My Proudest Moment 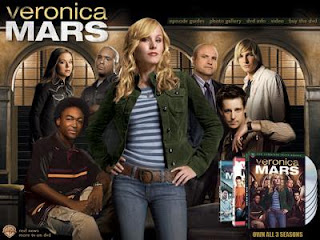 I'm not sure what it is a sign of, but I know it has to be a sign of something. I've had a few lackluster weekends of late (no good concerts) and have been scrambling for something to watch to relieve the boredom. Once the fall season starts and shows like Dexter, 30 Rock, and It's Always Sunny in Philadelphia return, there won't be enough time in the day to watch all that. But for now, it's minimal.

So, I went looking for something new on both Hulu and Netflix. Both services offer recommendations based on past viewing, and both recommended I check out the show Veronica Mars. I took the recommendation with a grain of salt since both sites also suggested Sliders, and that show was terrible. The premise of Veronica Mars - a cute high school girl is a sort of secret detective in her spare time - seemed like something I would instantly hate. Surprisingly, after watching a few episodes, I'm getting sort of into it.

Veronica (played by Kristen Bell) is a high school outcast. She's one of the "have-nots" in a school full of "haves." Her social status had been elevated since her father was the Sheriff, but when he loses his job in a recall election, Veronica loses her status at school. The Dad lost his job in the aftermath of the murder of Veronica's best friend, Lily, who was the daughter of one of the town's wealthiest families. When Sheriff Mars thinks that a family member is responsible for the murder, the town goes ballistic and has him removed from office. He then forms his own private detective agency. Veronica's friends want her to choose between them or her father. She chose her father, and lost all of her friends.

That's pretty much where we are when the show begins. While each episode has an individual "case" that Veronica tries to solve, the underlying mystery to Lily's murder is still a dominant theme. Even though pursuing the investigation ruined him, Mr. Mars is still privately working the case. So is Veronica. Hell, because of this single event, Veronica lost all of her friends, her social status at school, and her Mother (who left the family after the embarrassing fall out) from the recall election.

Even though Kristen Bell's perkiness can be annoying, and some of the dialogue is less than well crafted, I am slowly getting sucked in to the storyline. Veronica Mars only lasted three seasons before being canceled in 2007, so I still have plenty of episodes to watch. I'll report more later...
Posted by Dave Splash