Well, it's official. Don Draper has lost it. In last night's episode, "Waldorf Stories," Don hit a career high, while sinking to a personal low. Though Don was riding high from the firm's first ever Clio Award (an award created for outstanding achievements in advertising), he got so drunk that he actually left the trophy behind in a bar.

He also left Peggy behind, as well. In a manner of speaking. Peggy has her first big episode of the season (considering how much she used to be part of every story in the early seasons, this has been somewhat surprising), and despite all of the success she has had, she now realizes just how far she still has to go to be fully accepted as an equal with her male peers.

Don first. After interviewing a terrible young copywriter prospect (who just happens to be related to Roger Sterling's wife), Don and Roger begin preparing (i.e. drinking) for their appearance at the Clio Awards. Only Don, Roger, Pete and Joan would be attending the event, though the agency was nominated for a campaign created by Peggy.

At the awards, Don and Roger tie one on big time. When Sterling Cooper Draper Pryce wins the award, an intoxicated Don Draper merely takes the award and says nothing. The crew is then informed of a waiting client - Life Cereal - back at the office. Still drunk, Don attempts to pitch their new campaign idea to the company's executives. The execs are a little drunk, too, so maybe they didn't notice the state Don was in; but to everyone else, it is glaringly obvious. Most of the big shots at the agency drink copious amounts of alcohol during the work day, but rarely does it seem to effect their work. This time, it did. Don ended up pitching the idea given to him by the aforementioned terrible copywriter prospect...which Don said was terrible when he heard it sober.

At the after party, Don gets so loaded that he leaves the Clio behind and wakes up a day and a half later in bed with a woman he does not recognize. He is woken up by an angry phone call from Betty informing him that he is two hours late to pick up his kids. He quickly ushers his lady friend out of the room, pours another drink, and passes out on the couch. Don Draper is officially an alcoholic. 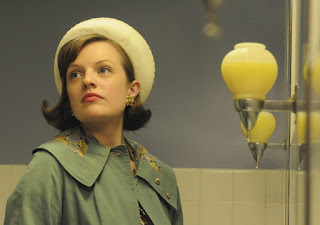 Peggy, who desperately wanted to be included in the post award celebrations, is told that she needs to spend all evening working on a campaign for Vick's cough drops with the new art director whom she despises. Her complaints about him fall on deaf ears, as Don tells her that he is more experienced and talented, so she needs to figure out how to make it work.

The new art guy, Stan, is lazy and arrogant, and appears to be more interested in getting dates with the secretarys than with working. He makes numerous sexist and insulting comments to Peggy after she implores him to do some actual work. When Don orders the two to get a hotel room and work all weekend until the proposal is done, it sets up one of the best moments of the night.

At the office, Stan talks constantly about his desire to be a nudist, but is unable to be one due to the "repressive" nature of women like Peggy. At the hotel, Stan sits around reading Playboy and doing no work, continuing to yammer on about nudism and repression and some other things. He claims he is unable to be creative in such a repressed environment, so Peggy calls his bluff on it. If being naked is what it will take to get some work out of the guy, then let's just get naked. Peggy removes her clothes and sits down at her typewriter ready to work. A shocked Stan, realizing his bluff has been called, reluctantly removes his clothes, too. After calling Peggy "the smuggest bitch in the world" he puts his clothes back on. Very little work was actually accomplished.

Still steamed from her exclusion from the Clio party and having to deal with Stan, Peggy shows up at Don's apartment when she can't reach him on the phone. In his hungover state, an embarrassed Don gets an earful from Peggy about Stan and is told to "fix it!" Don is also told which idea the Life Cereal account liked (the one stolen from the terrible new guy) and Don has zero recollection of the meeting. He also has no recollection of ordering Peggy to stay in a hotel room with Stan to work on ideas for Vicks. A disgusted Peggy leaves Don to wallow in his apartment.

A few other interesting things happened in "Waldorf Stories," with the most interesting being the return of Kenny Cosgrove. He is unhappy at his agency, and Lane offers him a job at SCDP. No one told Pete, however, and he is not happy about it. After Pete makes it perfectly clear who is in charge during a private meeting with Ken, Pete relents and allows him to come to the agency (truth is, they need his clients badly).

There were also some funny flashbacks to the time when Don first met Roger and joined the agency. Roger began reminiscing while working on his memoirs.

The Peggy and Don relationship is coming under serious strain, and much of it still has to do with Peggy's feelings of being ignored and left out of things because she is a woman. To Don, Peggy's complaints seem petty and unprofessional, yet if they came from a man, he would likely see them differently. I see things coming to a head soon on that front.

The Don and Faye relationship is looking like it will never be. Before Don went over the deep end at the Clio party, he tried hitting on Faye who told him he was "confusing a lot of things." Shot down!
Posted by Dave Splash